This past week I got the chance to go backpacking at Shenandoah National Park with a club from school called Women In The Outdoors. We left for Virginia on Thursday but first we spent a night base camping at Seneca Shadows campground in Seneca Rocks WV.  The night of base camping was nice to hang out with everyone before we hit the trail. I also felt like it gave everyone a chance to use their gear before we took it on the trail.

This trip was a little different for me because all I had to do was sign up and the trip was already planned by someone else which was really nice. Usually I am always the person who is planning things out and considering a million options. This time I just had to follow everyone else.

When we finally got to the park we stopped in at the Byrd visitor and information center to talk with the rangers and set up a back country permit for the two nights we would be spending in the forrest. The trip leader and VP of the club, Katie had already selected a route for us off of the national park’s website. It is really nice that the park already had some suggested back country routes set up considering the park has 500 miles of trail to choose from. The rangers provided us with a simple paper map of the trail but Katie purchased a much more detailed map of the section of the park made by an Appalachian Trail club. If you are backpacking in the park I highly suggest purchasing a nicer more detailed map. It was $8 and very good quality.

Here is a picture of the map Katie purchased and highlighted our trail on.

The trail began on the Appalachian trail for a few miles which I was VERY excited about since I read SO much about it this past summer.

The first day we were treated to a nice view shortly after we left the AT and got onto the Riprap trail. This was the only exposed view we had the whole trip. It looked like we could see for miles. There were SO many mountains in the distance.

I believe this spot was called Calgary rocks. We also passed another spot called Chimney rock but we didn’t spend much time at that view point as we needed to make it to camp for the night. 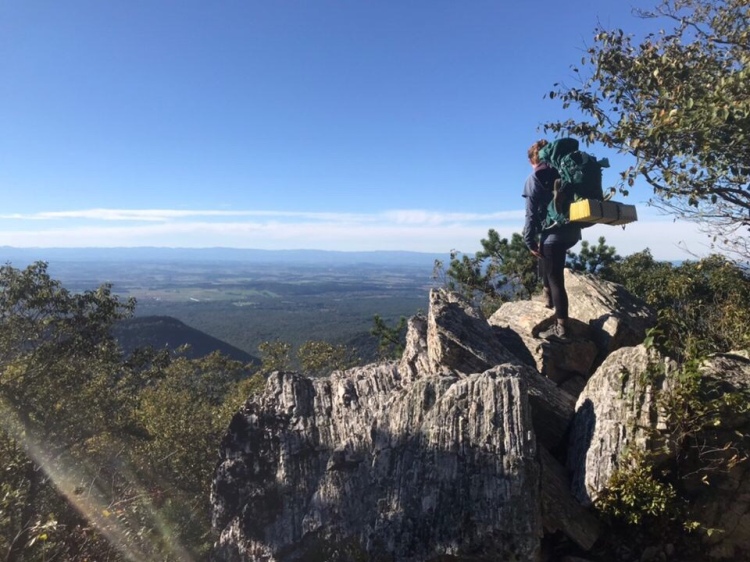 We didn’t start our hike until about 2pm and we ended up doing 7ish miles the first day. Right before night fall hit we started the first of our MANY stream crossings. The route description was not exaggerating when it talked about the water.

This was our first stream crossing and view of the water we would see the rest of the trip. 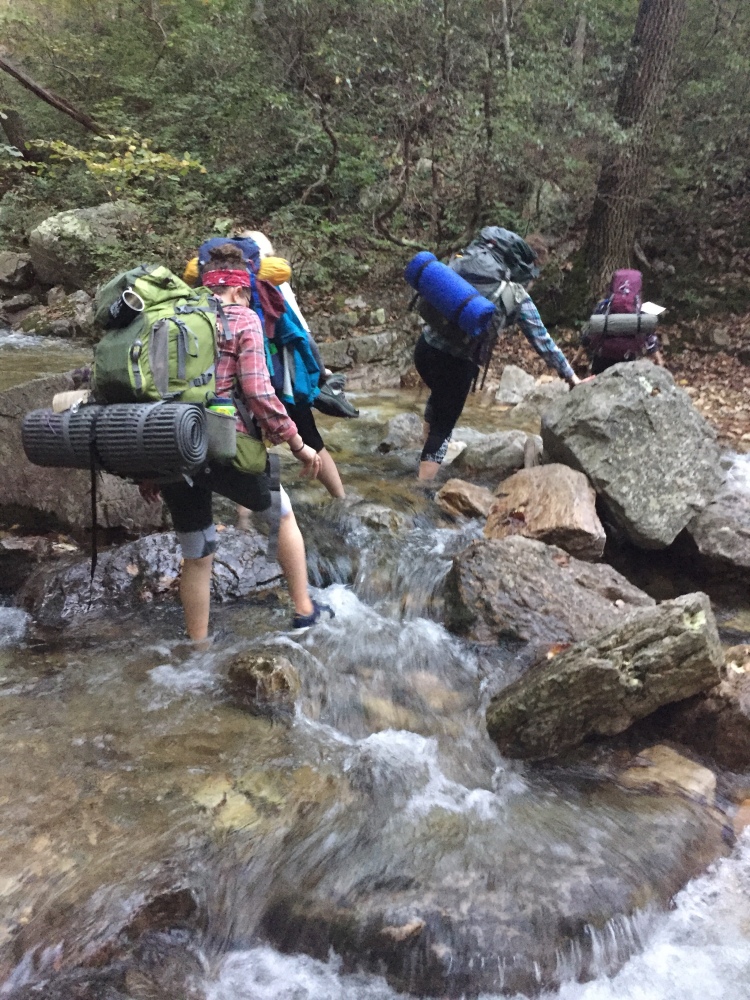 One of my favorite parts about Shenandoah is how clear all of the water is in the parks rivers. Although all the water crossings could be annoying we definitely had a guaranteed water source which was nice.

Eventually night fall hit and we were still hiking without camp in sight. It was slightly stressful but I had lots of fun crossing the rivers that night. I was with eight other girls so I wasn’t scared but I know I would’ve been freaking out if I was with just one or two other people. It was so nice to be with so many other women outside it made me feel a lot more comfortable and confident on this trip.

We had nine people who needed to cross the river but only eight pairs of water shoes. We worked as a team at every crossing to get everyone across quickly. The water was shallow in some parts but up past my knees in other areas. We finally found a camp at 10pm and set up for the night. We had rice and lentils with onion for dinner and I got to see how a ʕ·ᴥ·ʔ hang was done. Note to self: Dry bags are awesome and always bring long thin paracord.

I slept GREAT that night and the whole trip. It was honestly the best sleep I’ve ever gotten in a tent outside. I think it was because I felt comfortable with so many other people, my sleeping bag was really warm, and my new sleeping pad rocked. I definitely like the new one way more than my yard sale blow up one.

The next morning we hit the trail again at 10ish which was really late for me. I won’t complain about getting to sleep in though which is something I never usually do when I camp.

This day started with an uphill hike that felt like it went straight up the mountain. Every time the trail turned it was another uphill. When I got to the top I felt proud of myself for just pushing through it. I definitely enjoy uphill hiking WAY more than downhill. We spent some time on a ridge line for a while which was neat and then got back onto the Appalachian Trail. 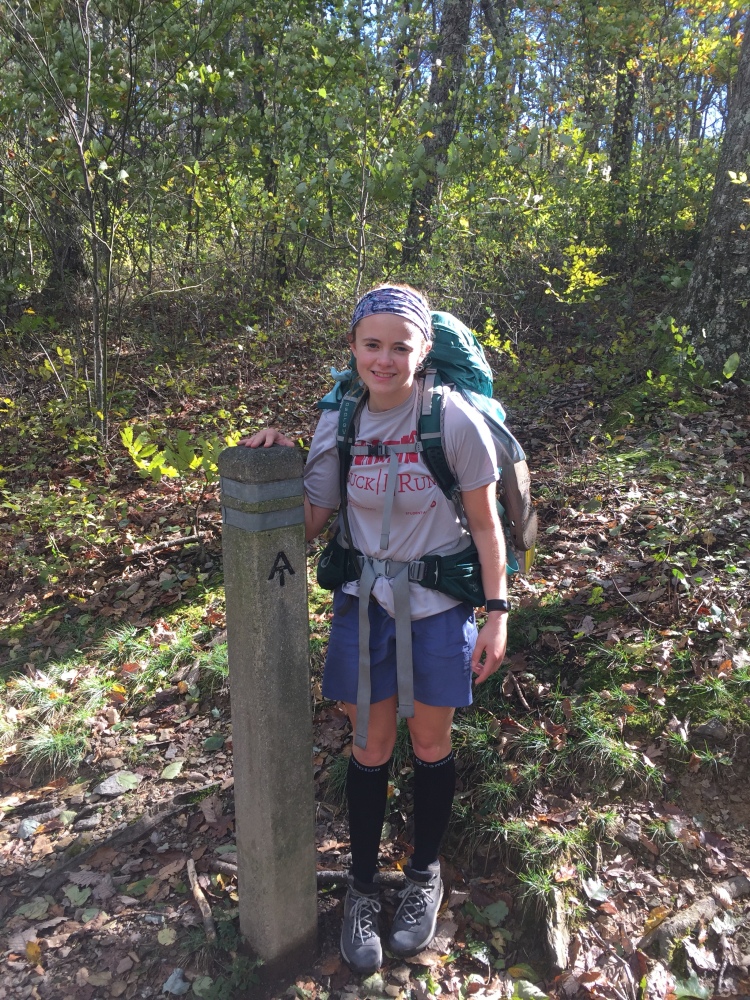 Ridge on the AT.

And a neat spot we stopped for a snack on the AT.

Eventually we ended up on the North Fork Moormans River trail and began the river crossings all over again. Part of our trail went out of the park onto private property which was interesting. At one point the trail led us to another river crossing but it looked like it was SO DEEP. And on the other side of the river it looked like the trail turned into the river. After sending someone to investigate we determined it was crossable and the river slightly did take over the trail for a bit.

Looking back at the others coming across the large river crossing onto the trail. 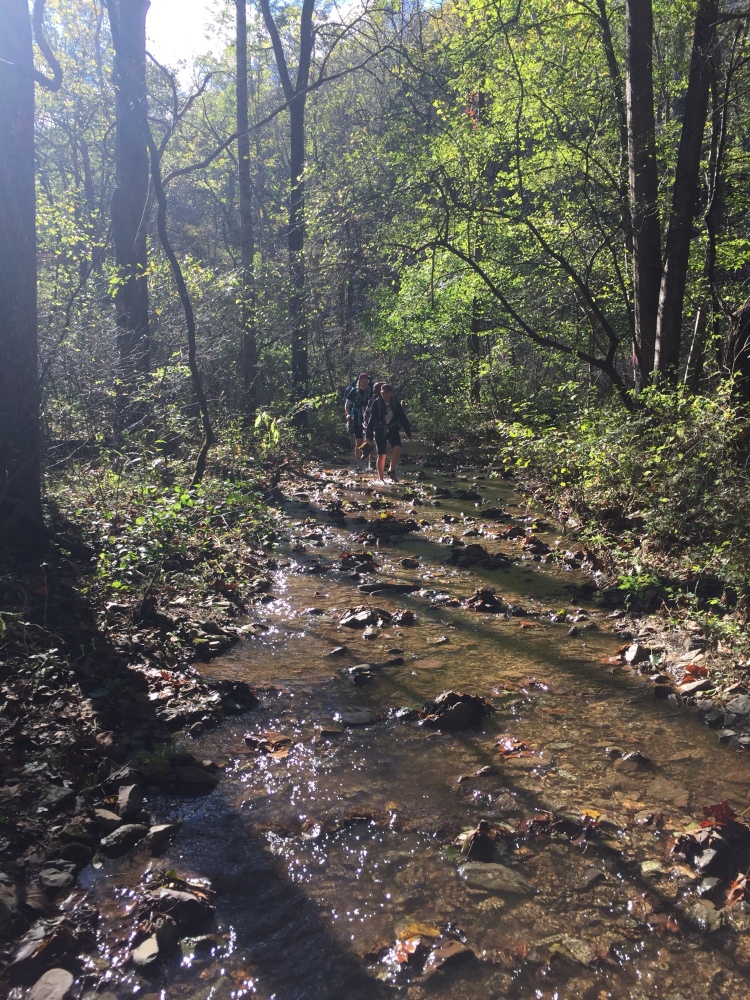 Here are some pictures of some more miscellaneous river crossings.

That day we hiked a total of 10ish miles and camped about 3 miles from our cars so we had a short hike in the morning. Around dusk fall we saw a ʕ·ᴥ·ʔ which I was so happy about! It was close to the trail but then it ran up the hill of the ravine. We made camp before nightfall this time! Rice and this sauce that came in packets called tasty bites (I think) were for dinner!

The next morning we woke up early and packed up quick enough to hit the trail around 8:30! We made it back to cars at 11am and then drove 8ish hours back home to Columbus, Ohio. I had such a great time with this group of girls and hope to get a chance to backpack with them again! One thing I learned on this trip is how much stuff I can carry in my pack! Also getting a good nights sleep in the woods is possible. Shenandoah is currently my favorite National Park although I really haven’t been to many. It’s a great destination for a trip in October!

Advice for people going on a trip here: