Last night I fell asleep before 8pm and had the best sleep I’ve ever had on the trail. I stayed in the shelter and it never filled up. Everyone staying in it was extremely nice too. I decided to do a short hike today because my feet were hurting really bad and I wanted to see if Flamingo, Cocoa, and Locks would catch up to me. I heard they were staying at the shelter 3 miles before me.

I woke up around 6am and got on trail a tiny bit before 7am after I ate my granola bars for breakfast. I was hoping the rain would hold out until noon, but it did not. When I had about 5 miles left to the shelter it started raining pretty hard. The trail was really rocky and wet which made me walk pretty slow. This was the first day I was feeling mentally burnt out from being on trail. Of course it happened as soon as it rained. At this point I realized I had walked further than I probably ever have without setting down my pack once. I ended up doing the entire hike without taking a single break. I got really hungry and tired but I did not want to sit down in the rain. I made it to the shelter at exactly 11am and crashed. I said goodbye to Rockslide, as he was pushing on another 7 miles at least. It was nice hiking with him the past 4 days while he was resting his legs up, but now he should be hitting heavy miles if his knee if feeling better. I think he’s trying to do the whole trail in 100 days or less. 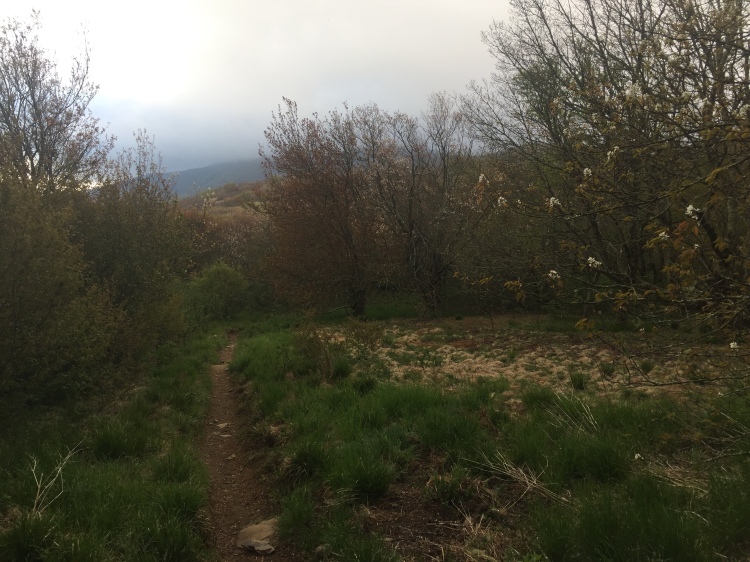 I set up my sleeping stuff in the shelter and talked to other hikers as they showed up. I was happy to see Locks, Flamingo, Cocoa and her dad. They set up in the shelter for the night as well. Pongo also decided to stay in the shelter, I was happy to see him too. I met him at Fontana Dam. He has a ukulele with him that he has been playing for everyone at camp. I love it. He will be getting off trail in Gatlinburg. He just came out for a section and did some trail magic. I think he finished his thru hike last year.

I was really bored sitting around the shelter all day because I had nothing to do, but I needed my body to rest. I hope I can fall asleep tonight. I feel like I didn’t exert enough energy to get a good nights sleep or even eat that much food.