This morning I woke up screaming. I was sleeping in a shelter with 5 other people and we all woke up in a panic at 6am because a huge tree branch fell on the roof of the shelter. Some people heard it cracking before it fell but I didn’t hear it until it hit the roof which was really scary. At least it wasn’t a whole tree! It sounded so loud. After getting my adrenaline going that early in the morning I got ready and hit the trail before 8am. 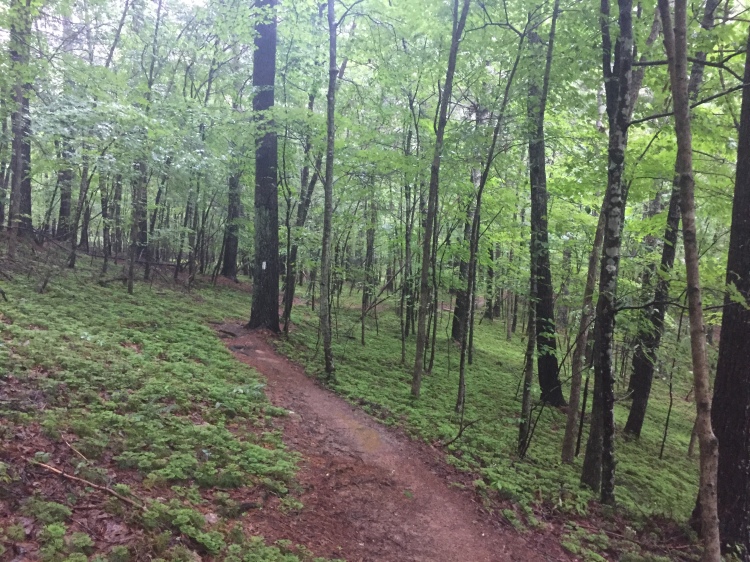 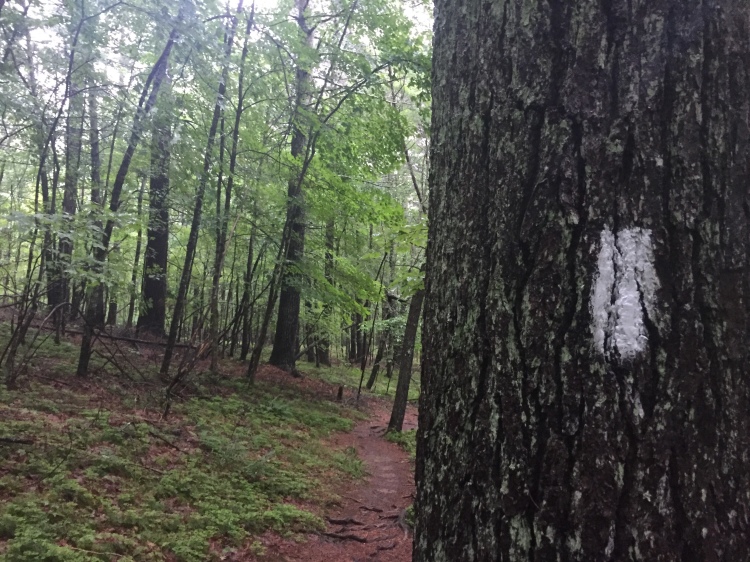 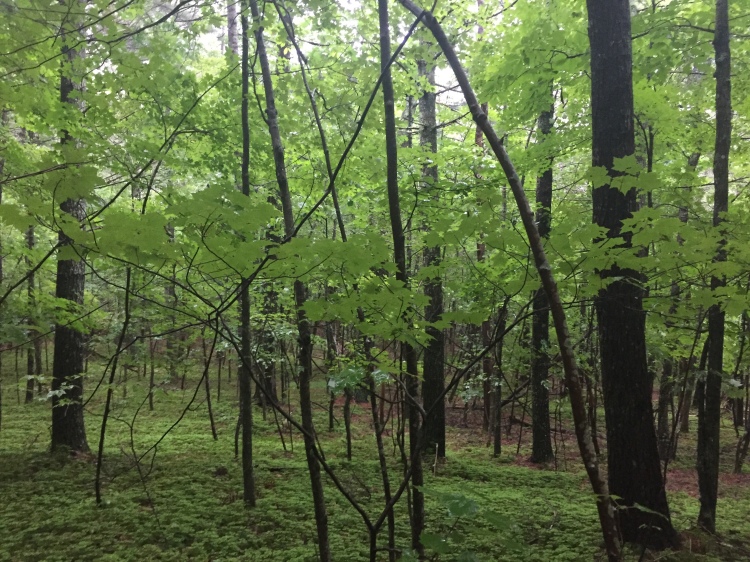 It still hadn’t stopped raining so I put on my wet clothes again which seemed a little bit easier his time but still just as uncomfortable. Today I hiked by the Audie Murphy monument which is supposed to commemorate one of the most decorated combat soldiers of WWII. I didn’t get any pictures of it because everything was so wet and my phone was burried at the time. Next I hiked up a rock formation called Dragon’s tooth. I was looking forward to seeing it so much but all I could see was the rock in front of me. Dragon’s tooth is part of something known as the Virginia Tripple Crown which also includes McAfee Knob and Tinkers Cliffs. They are supposed to be some of the best views in Virginia which I’ve been looking forward to for a long time. It really stinks that I won’t be able to see any of the things I’ve been looking forward too due to unfortunate the rain and fog. Dragons tooth was incredibly dangerous in the rain. It was difficult to navigate the wet slippery rock with a 30 pound pack on my back. I had to sit on my butt and slide down the rock several times. My knees were hurting so bad by the end of it because I had to brace myself so much and take giant steps down big rocks. It even had metal ladder rungs I had to use at one point! I want to come back and do this stretch on a nice day really bad. 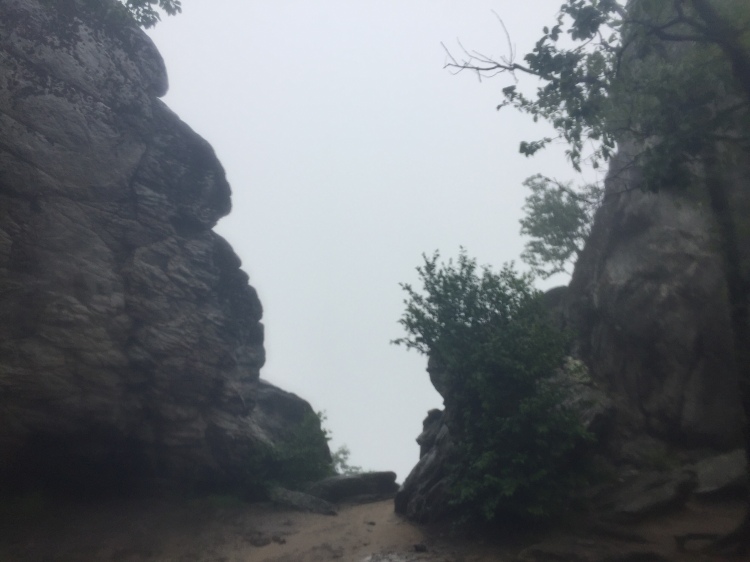 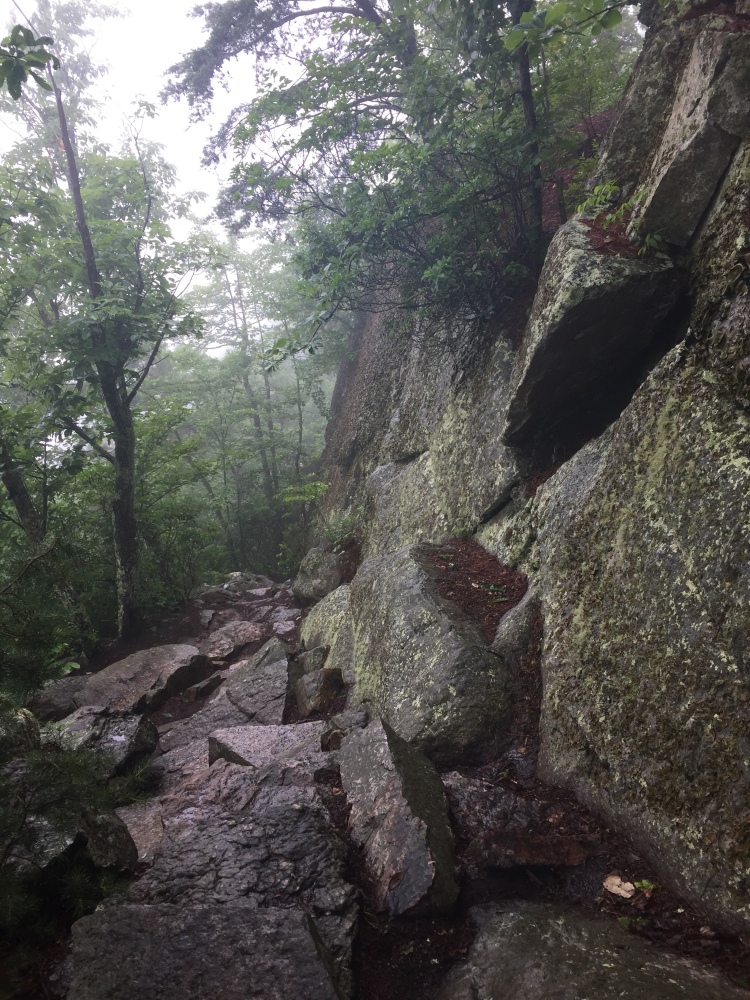 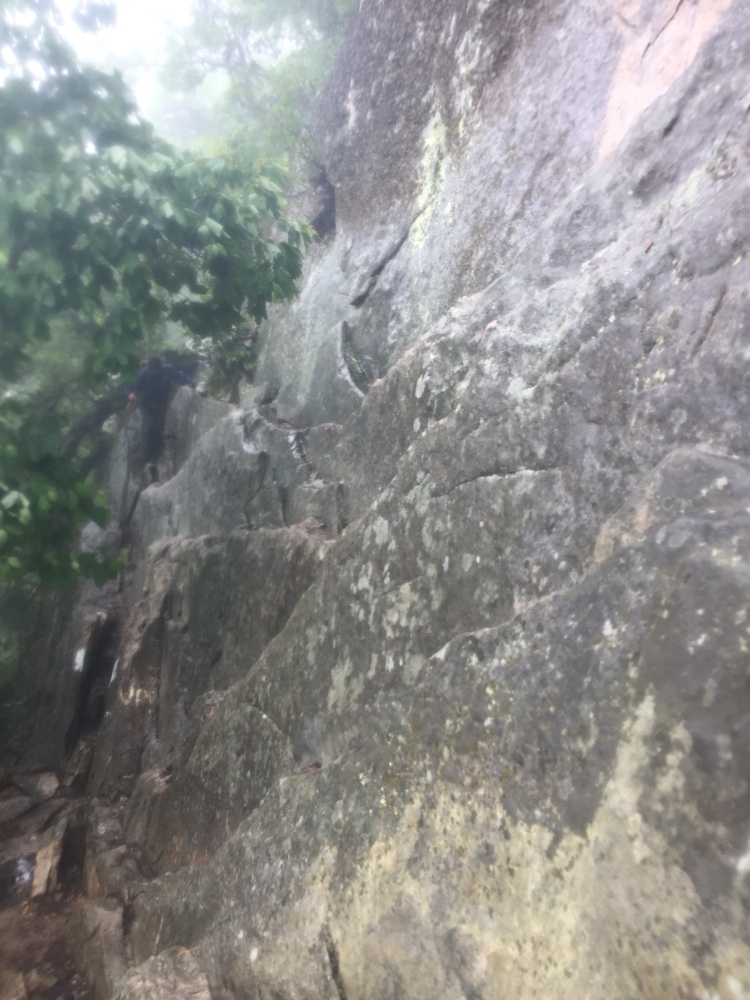 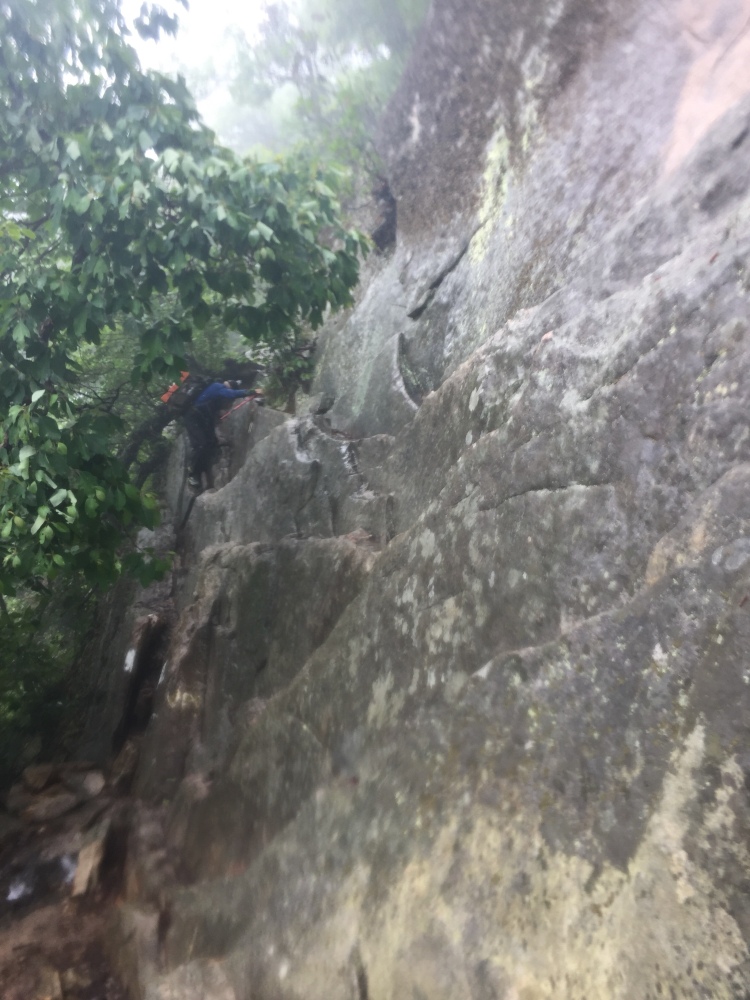 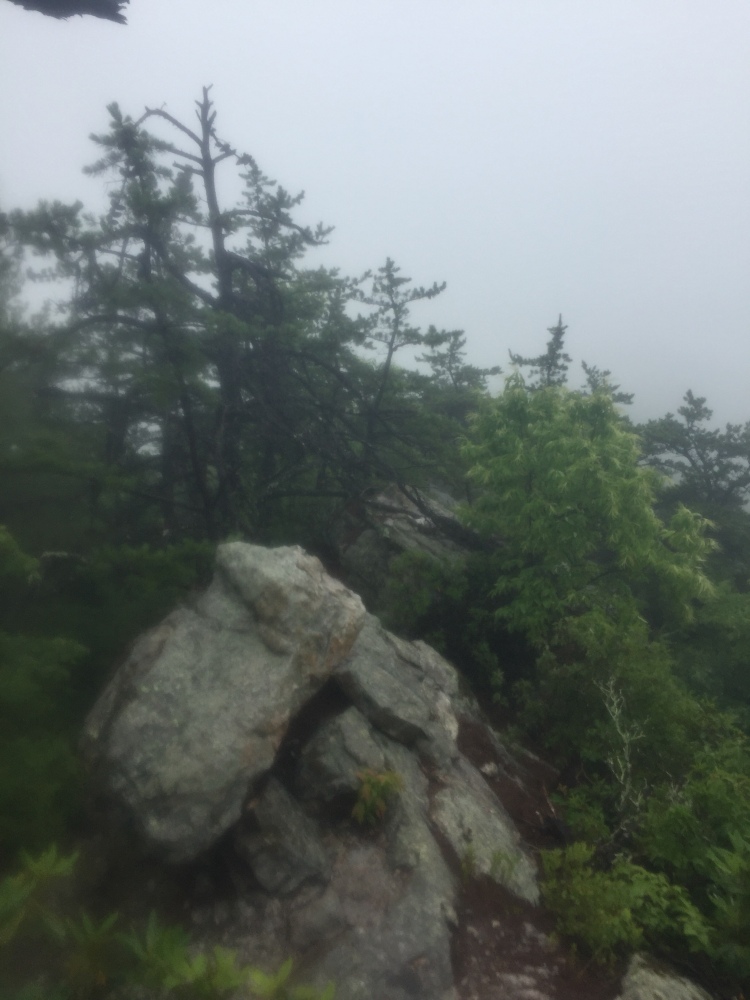 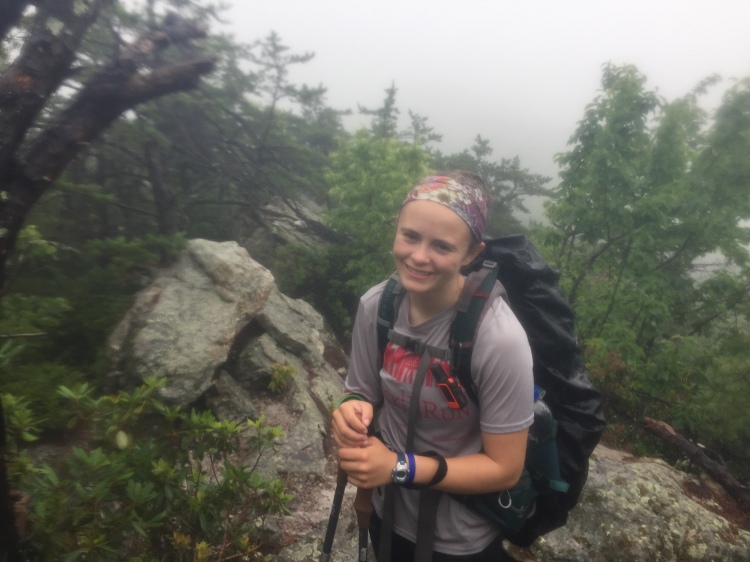 On top of Dragons tooth I finally got the first cell service I’ve had in three days. It was nice to talk to my family and find out where my sister is. Eventually I hit a road that had a hostel and a classic hiker buffet that is not to be missed. I was looking forward to going to this buffet for a long time because I had heard so much about it so I decided I would go today and see how I felt after! It’s called “The Homeplace” and it serves all you can eat family style southern food. I walked to the hostel where they gave us a free shuttle to the restaurant in the back of their shuttle van with no seats. It was packed with wet smelly hikers. When we got to the Homeplace everyone was dressed up super nice and the restaraunt looked fancy from the outside. There were a ton of people there and we all felt so out of place. We all looked like homeless people and smelled terrible. The guests at the restaurant might not know what we were doing there but the restaurant itself knows that they are a popular hiker hotspot. The food was great! They served us potatoes, gravy, green beans, pinto beans, coleslaw, roast beef, ham, fried chicken, biscuits, and peach cobbler. The biscuits were my favorite by far. They were so warm I just wanted to crawl inside one and sleep. 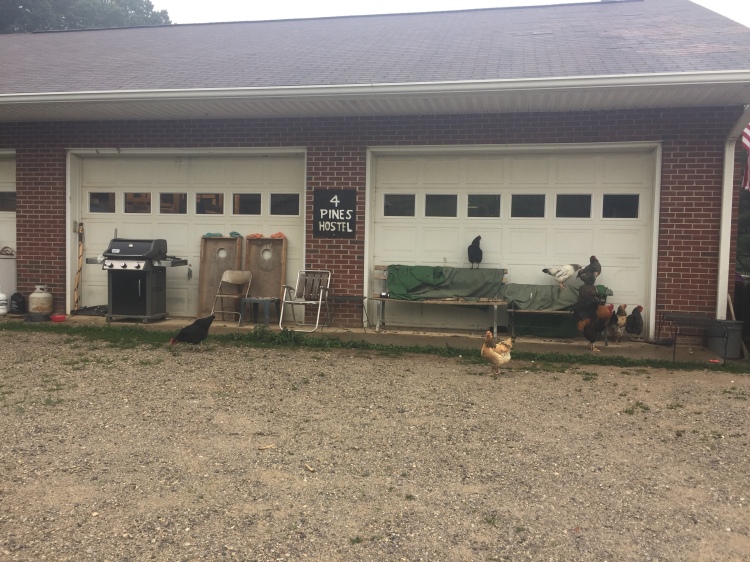 After I got a ride back to the hostel I decided I wanted to go back out on the trail and hike 7 more miles even though it was already 7pm and still raining. Everyone thought I was crazy for leaving so late in crappy weather after eating so much food. I would have had to sleep on the floor if I stayed there because it was completely full. Everyone wanted to get out of the rain and it was the first place to stay in almost 80 miles. I just wanted to leave and get on the trail since the next town was close.

Back on the trail I started walking through some fields with hay that was up to my waist. The trail was completely covered in mud and I was sliding everywhere trying to go uphill and not fall over. On the the gates I had to walk through in the field was so small I had to take off my pack to go through it and even then my pack almost didn’t fit. At one point I stepped into a giant mud hole where the mud when up to my shins. It looked just like the rest of the muddy trail except I sank down really deep! A bit later I came to a large creek that was very swollen. The trail walked right beside the creek and the creek was about to flood the whole trail! The water was already flowing very fast down half of it. It was getting dark but luckily I had my headlamp ready to go. I eventually left the fields and went into the forrest. 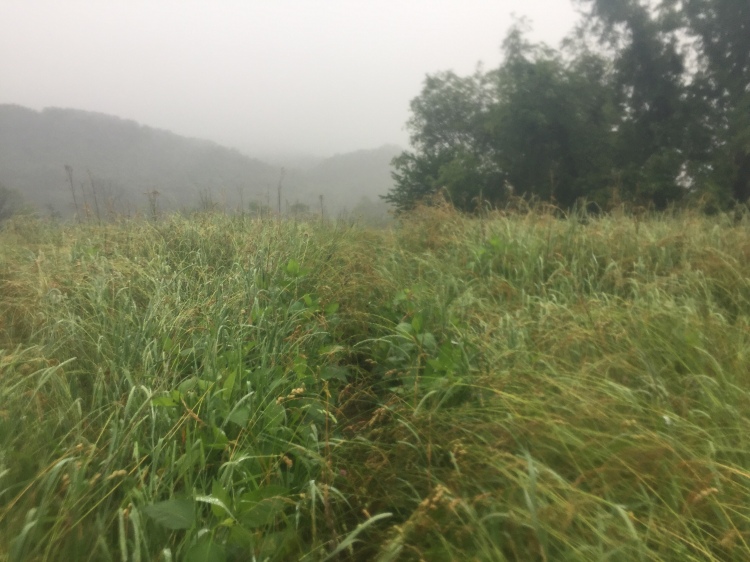 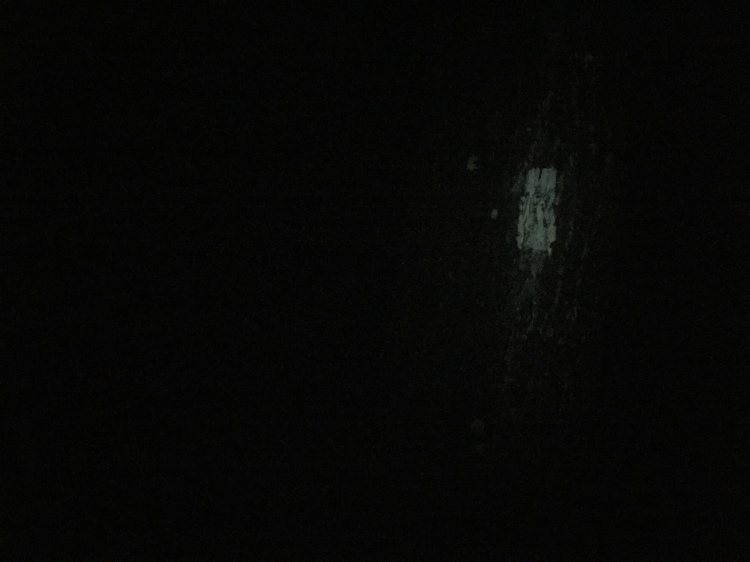 All of a sudden I saw a large black figure that looked like it was rolling around in the middle of the rocky trail. At first I thought it was my friend Flamingo because I was expecting to hike past his tent soon. Then I realized it was a bear! I was 20 feet away from the biggest bear I’d ever seen on the trail. I made a loud noise and it looked at me then quickly ran away. I was so scared. I had completely forgot about bears on the trail until right then. I was also all alone night hiking for the first time by myself. I had actually been really nervous about doing this before I got on the trail but I didn’t even think twice about having to do it tonight. It’s so funny how many fears I’ve lost about the trail after being out here for so long I don’t even think about some of them anymore. After I saw the bear I just started yelling random things and making lots of noise as I hiked. My speed picked up significantly and I passed Flamingos tent. He heard me yelling things at the bears and I stopped to talk to him. I let him know I saw a bear between 0.5 and 0.25 miles from his tent. He was really scared because he was camping all alone and didn’t hang his food. He gave up on making it to the shelter because he got shin splints and was hurting very badly. He told me he didn’t sleep all night because he was so scared about the bear being close to him. I kept hiking 3 more miles to the shelter. My headlamp wasn’t working great at all and I could barely see anything. It was really hard to walk over all the rocks and roots. Luckily the trail blazed are white and reflective off my head lamp. There was a time I had to check my mapping app to see if I was still on the trail. I made it to the shelter completely exhausted from hiking so fast and yelling the whole time. It was 10pm and there was only one other person in the shelter. It was an older guy (50?) named double shot that I had hiked with a tiny bit earlier. He didn’t sleep much this night either because all he had to sleep inside was a garbage bag. Everything he owned was completely soaked including his sleeping quilt. He hiked the PCT recently and told me that he had never been rained on this much in his whole life until he hiked the AT. He has been struggling with this trail a lot in several ways as have many of the others I have met who have done a different long distance trail first. Anyways, I was happy the day was finally over and I had a warm spot to sleep in an almost empty shelter out of the rain!