Today I woke up on the porch of the Blackburn ATC center at 7am. I slept less than 4 hours again last night which was super frustrating. I was worried about my phone never turning back on and I was in too much pain despite taking ibuprofen (or something). My med kit is just a bag of random pills that I can’t distinguish from each other except for melatonin, turmeric, and the rest are for pain, inflammation, or headaches. I got my stuff packed up and put on my wet clothes. There was a hanging scale on the porch so I weighed my pack. I haven’t weighed it since my first week in Georgia but this time it weighed 27 pounds without water and only one day or less of food! My pack has definitely gained a lot of weight by me adding tons of items to it since I started. It is easy to add things to my pack because I have so much space in it, but I am slowly running out.

The first three miles of the trail was relatively nice. There were some rocks which killed my feet but other than that it was significantly flat. I stopped after three miles to use my golf ball because one of my feet was hurting worse than the other. At mile six I crossed a very busy highway where I had to walk down the side of the road for 0.3 miles to get to a store. The guide book said the store, which was a gas station, was a great resupply but I was so disappointed when I got there. I ate a bagel with cream cheese, a pepperoni roll, and a chocolate milk for my second breakfast. Then I went back inside to try and buy food for five days. I was struggling to find any food that I could possibly eat on the trail that wasn’t incredibly marked up in price. They were selling protein bars for $4-5 each and a bottle of juice for $6. I stupidly bought two packs of ramen noodles, two packs of M&Ms, two Powerades, and a pack of tasty cake cherry rolls before giving up on buying any more food there. I figured I would just have to find some way to get off trail the next time I walked by another road or hit the next town which would be relatively soon.

I walked back to the trail and only had six more miles to go until I wold reach the Appalachian Trail Conservancy (ATC) in the town of Harpers Ferry, West Virginia. This is at mile 1025 on the trail, but it is celebrated at the psychological and emotional halfway point. The actual halfway point is about 50 miles north. The reason it is celebrated as the halfway point is due to the location of the ATC, leaving Virginia (which is the longest state on the AT by FAR), and entering a new region of the trail. The ATC has a tradition where they take your picture as a polaroid on the porch and you have to fill it out a certain way and put it in their scrap book. They have several years worth of pictures of every thru hiker that has walked in. I have been so excited to get here!

The six miles between the gas station and the ATC went terribly for me. Before the gas station I was already feeling terrible. It just got worse from then on. Not sleeping, foot pain, being homesick, and not being able to talk to my family all added up at once. I think I cried about every step I took between the gas station and the ATC. I kept thinking about going home for a week, like I had been for the previous three weeks. I sat down because I was getting so hot. I looked at my legs which were prickling like crazy. This has been something that has been happening all over my back and legs for a while now but it had been a week or two since I felt it. When I saw my legs, there was a red rash all over them. I’m pretty sure it was heat rash. At this point I made the decision to send a message to my mom off of my satellite GPS messenger that has four buttons. It didn’t take as long as I thought it should to type out the message, but I said ” I want to come home for real. Just a week”. I felt awful after I sent the message almost like I was giving up. It wasn’t the first time I thought about taking this particular week off. In fact I called my mom three days ago crying about wanting to come home and take a break when I got to the halfway point. After talking to her on that call, I felt a little better about staying on and not coming home, but here I was three days later thinking the same thing. I figured if I had thought about taking this break for that long, then I definitely should, as much as I feel like taking a break will be rough. Since my boyfriend was coming to visit me for the fourth of July weekend, and I was going to take multiple zero days in a row anyways, it made sense to take a long break now. I have an already planned ride back to the trail, and I’m only taking a few extra zeros rather than a whole week of zeros if I waited to take time off later. My mom miraculously messaged me that they could come pick me up from the ATC later tonight. Eventually, after the rash on my legs started to look a little better, I got up and kept walking to the ATC. I crossed the Shenandoah River on a large bridge/ busy highway before I reached the 0.2 mile blue blazed side trail to the building I have waited so long to arrive at.

I walked out of the heat and into the air conditioned ATC and was immediately greeted by the workers there and shown around. They had a store which sold all of the gear they sell online, a very cool 3D topographical map of the Appalachian Trail, and a room for the hikers to hang out in. They said I could let them know when I was ready to get my picture taken by them for the photo album. I sat down on a chair in the hiker room and talked to some people that I have passed the past few days. Next I made a phone call to my mom from the landline they have available to hikers. She let me know that they would meet me at the ATC at 8pm to pick me up and take me home. I was glad with my decision to come home. It was so cool to see the giant map of all the mountains I had just walked over and still have to walk over. I ran my fingers over the mountains and remembered the challenging elevation changes on some of them. The one that stuck out to me was the valley between Priest Mountain and Three Ridges which I had deemed the most challenging climb in Virginia a week or two ago. When I was ready to get my picture taken, I posed by the sign in the front of the building with my pack. Then I filled out the information on it and added it to the album. I can’t believe how many hikers had been visiting the ATC everyday on their thru hike! Sometimes it feels like I am all alone in the woods, or its just me and the bubble of 10 people I have seen for the past few days. In reality, there is always a group of total strangers about 5 miles in front of and behind me at all times. I just can’t see them! The ATC assigns each thru hiker who reaches Harpers Ferry a number just like the one I received when I started in Georgia. In Georgia I was hiker number 757 and today I was the 1099th hiker to pass thru the ATC. I couldn’t believe how many people have reached this point! I expect about 700-800 of the 2-3,000 plus hikers who started the trail to finish. You can look up yearly statistics on AT finishers on the ATC’s website. My sister also put her picture in the book when she stopped by two days before me. She was hiker # 1001. I can’t believe 99 hikers came thru between us. Even though my phone is broke so I lost all my pictures, I did have someone text my mom a picture of my ATC photo. 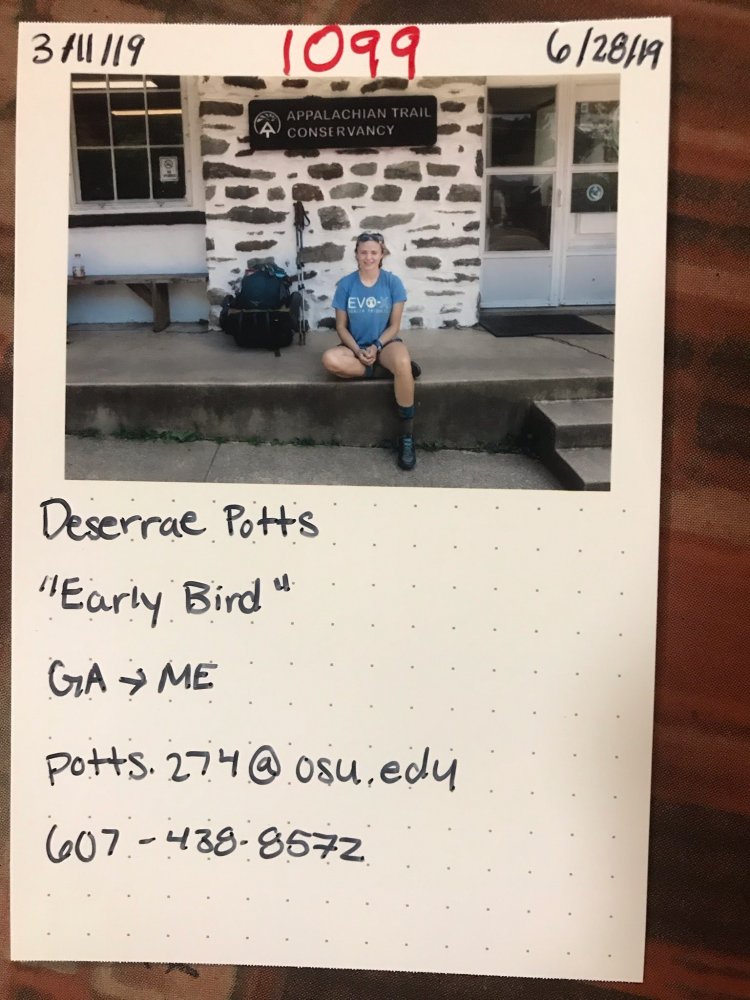 It was 2pm so I had a lot of time to kill before my parents came to pick me up. I joined Fancy Feast and her friend who is slack packing her for the four state challenge for dinner at a pizza place. I, and several others were supposed to do the 4 state challenge with her but all of us are so injured and hurt except for her, that it’s not a smart idea. The four state challenge involves walking 46 miles through four states on the AT in less than 24 hours. The states are: Virginia, West Virginia, Maryland, and Pennsylvania. The challenge ends at the Mason-Dixon line which divides Maryland and Pennsylvania. She will be waking up around 3am tomorrow morning to begin hiking and plans to finish around 9 or 10pm at night. I hope she makes it! I am interested to see how it will go for her.

After dinner I sat in front of the ATC until 8pm when my parents arrived with my dogs. I was so happy to see them and get hugs. We drove straight back home to Ohio and got there at 2am. I am so thankful for all their support and genuine interest in watching/ helping me hike the AT. I remember being so scared to tell them that I seriously wanted to do it. Here we are a year later and I feel like I made my family go crazy about a trail. They have been watching lots of backpacking videos at home without me, I think its awesome!