This morning I woke up at 6am and got on the trail just after 6:35. I was on a mission to get to the post office before they closed for their afternoon lunch break. All my stuff was still wet from the night before and the trail was very muddy. The terrain was pretty flat and I only had about three small climbs before I reached town. One of the climbs had tons of rocks, some of which I had to use both my hands to push up on and climb over. I took a few small breaks to rest my feet and eat some snacks. About a mile before town I started walking through corn fields and then the trail got super flat. I planned on hiking three miles an hour again, but I was so tired I could only go a little over two. I made it to the post office at about 11:30. The town of Boiling Springs was super cute. There was a public pool that was incredibly busy but it had three water slides. One of the slides was even bigger than the one I went on a few days ago! I stopped into Cafe 101 and bought myself a salad. It was so good I ate it in less than five minutes. I wanted to buy another one but they were $9 so I couldn’t justify it. I can’t wait to get to a grocery store so I can make myself a giant salad to eat all day long. In the mail I got a box from my mom with m and Ms and my prescription foot cream. I was super excited to try it. I went crazy and ended up sending home a ton of stuff I didn’t want to carry anymore including my stove, pillow, chair, and a bunch of extra things I was carrying. I will really miss my chair and pillow but I lost about two pounds by getting rid of them. I also put my sleeping bag and puffy jacket in a bounce box and mailed it to myself at a town I will hit in a few days. I hope I don’t regret it and that it’s warm enough to go without it! I was really scared about this, but my pack is so light now. If it’s still hot and I don’t want my sleeping bag, I will bounce it to the next town I will go to. As long as I don’t open the box, I only have to pay to ship it once. I snapped my plastic spork right before I was about to leave town so I stopped into the outfitter to buy a new one. They were having a sale on their chacos. They were 50% off and I heard that some people had luck with them curing their plantar fasciitis. I decided I would give them a try despite how heavy they would be to carry. I sent home my Crocs. 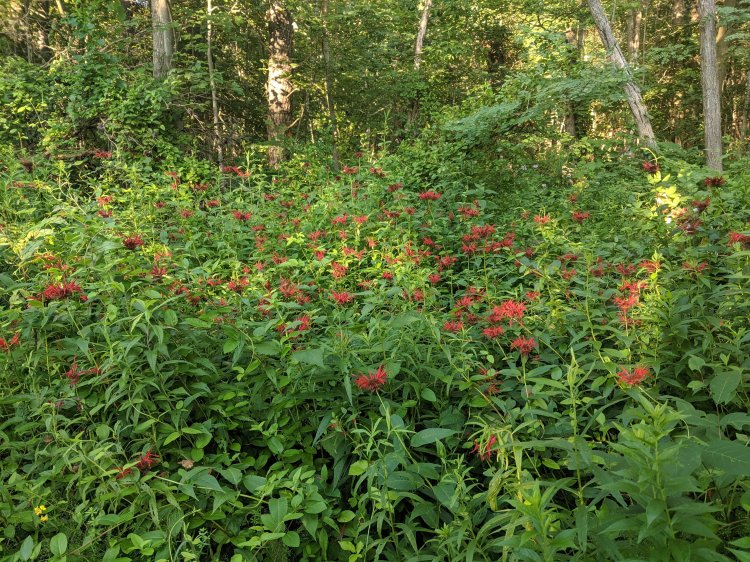 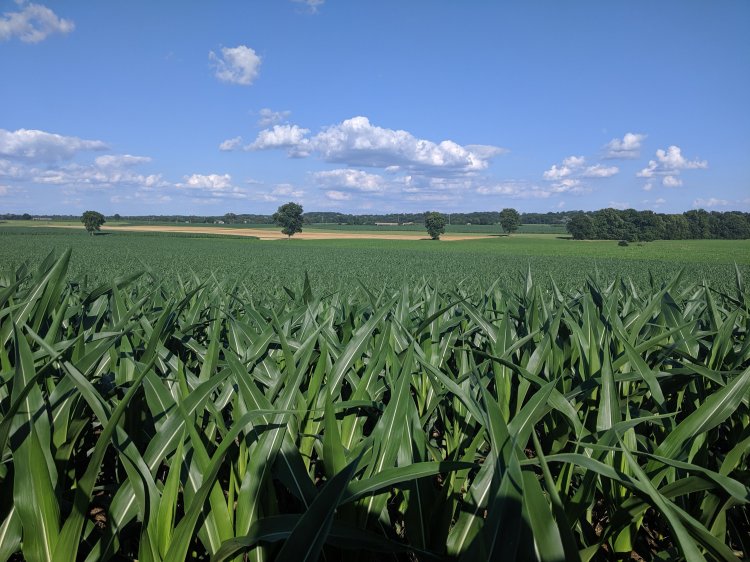 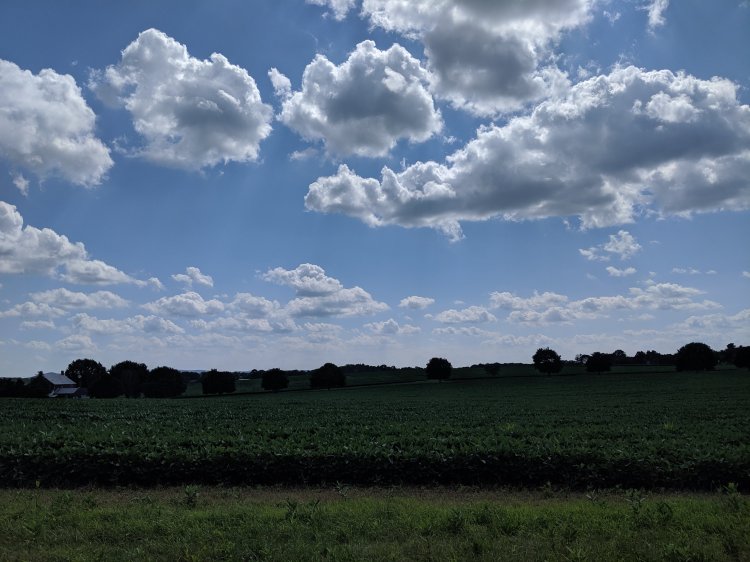 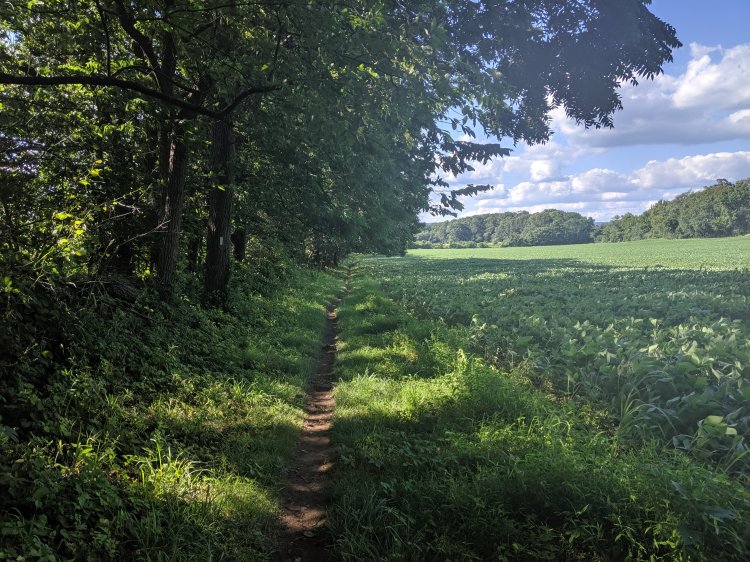 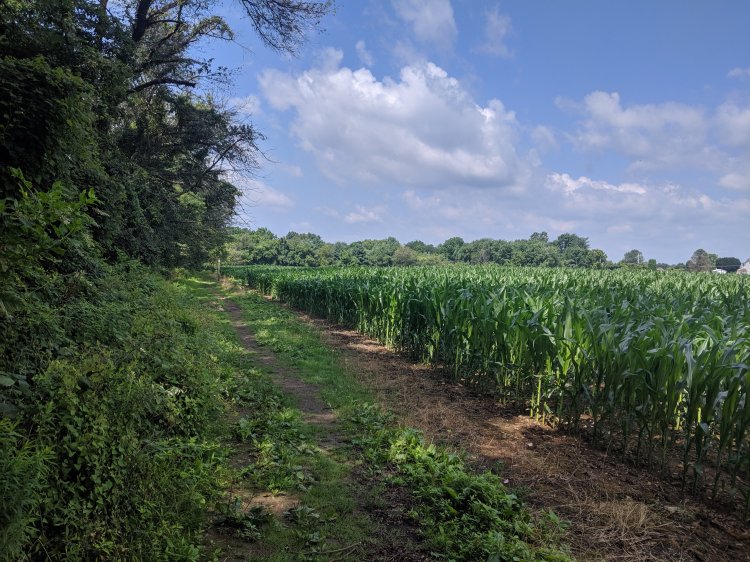 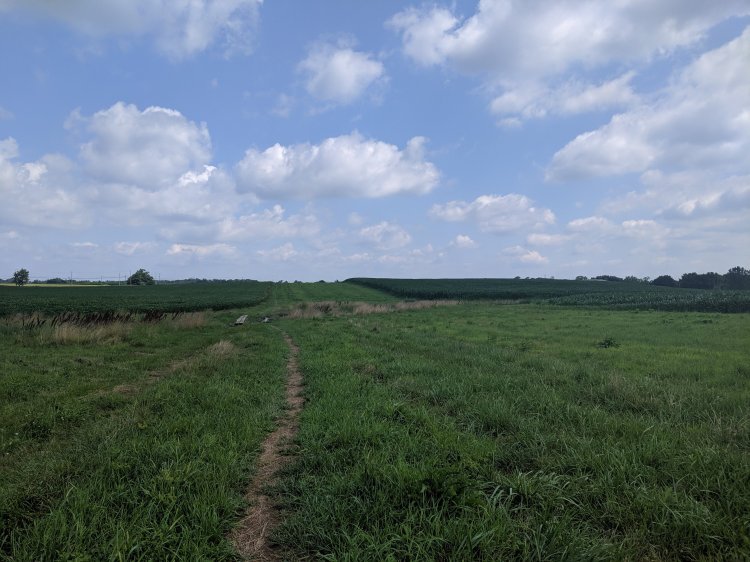 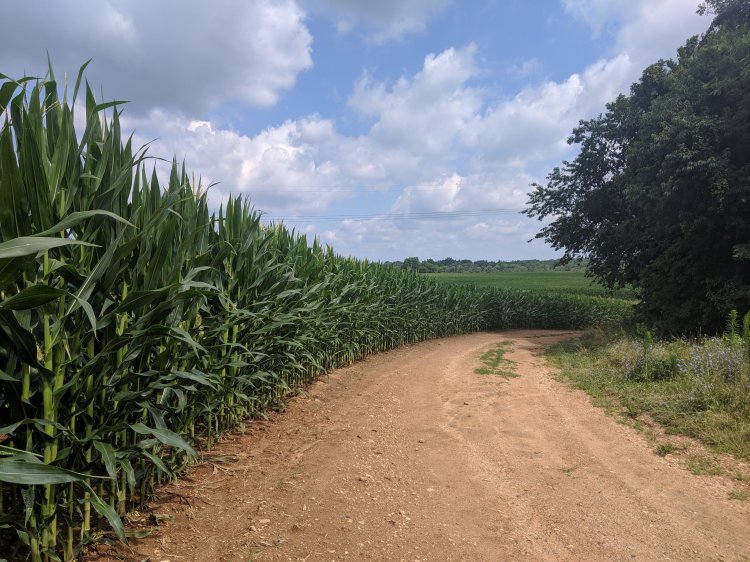 I got back on trail again after 2pm, it was probably almost 3pm. There was no camping or water for thirteen miles after I left town so I was forced to hike a really long day. Almost the whole thirteen miles I spent walking through corn fields and crossing a ton of roads. At least it was still incredibly flat. I thought I would hike this section really fast, but I was going so slow in the heat. My back felt amazing with how light my pack was. I tried hiking in my Chacos but as expected they were starting to give me blisters. The other thing I know about the shoes is that they can be super difficult to break in. I sat down a few times to snack on my m and Ms and rub my feet. I was just taking my time. Flamingo who started the day 8 Miles behind me was at least hiking 30 miles today, so I said he should go for the 40 mile day he’s always wanted to do. Today was great terrain to do it on. I agreed that I would wait for him at the shelter out of town and we would night hike his last 8 Miles together. This will put me at 30 + miles for the day. This is something I wanted to happen at least once on the AT and why not today since the hiking was so easy and I got to take so many breaks? As I type this now I am taking almost a two hour break at the shelter waiting for him to get here so we can hike on. I was surprised to run into Cocoa and Flip at the shelter who I thought would have definitely hiked 8 more miles to the next one. They are going super slow, but it’s probably smart! Right now my feet are hurting a bit and I feel exhausted, but I think I have eight more miles left in me. I just took some ibuprofen and used my foot cream.

Flamingo showed up a little after 10pm. I was all ready to go. I made sure to do my stretches good before I left. When I saw him I could tell he was getting delirious. We headed off into the dark with our headlamps. The terrain was pretty nice and we had a good time hiking. I started getting delirious as well about one mile in because I was so tired. We stopped a few times to eat snacks and rest our legs. There were a few fields we walked across and the air was significantly cooler in them which felt great. It was nice to not be profusely sweating while hiking or having gnats annoyingly fly in front of your face. Our original plan was to hike all the way into the town of Duncannon which would put me close to 37 miles and Flamingo at 45. Right after flamingo hit 40 miles we both just wanted to give up. I forced us to hike at least one more mile to the shelter. We decided that we would just cow boy camp on the side of the trail so we didn’t wake people up at the shelter. As we were discussing this we passed another hiker passed out on the side of the trail. I was dying laughing that someone else had the same idea as us. When we got the the shelter we both layed down on the side of the trail. I blew up my pad and laid down on top of my tent using my food as a pillow. Flamingo laid down on the dirt first before using his tent as a pad. We were laughing at everything and felt like we were going crazy. It was one of the most fun days I’ve had on the trail. I was freezing all night and wished I had my sleeping bag. At the same time I was very happy I didn’t have to carry it today.