Last night was yet another very cold night despite my attempt to warm up my sleeping bag via the “hot rocks” method. Regardless, TODAY IS THE DAY! I was feeling very excited and anxious to get above tree-line on Katahdin, to rest my eyes on the northern terminus I have been day dreaming about for so long, to officially earn the title of “thru hiker”, to stand on top of the aged wooden sign a free agent with unlimited possibilities of what comes next. I packed up my things and waited on Doc and Fish. Sponge still didn’t show up last night which was concerning. I couldn’t wait any longer. I had already delayed this hard earned day for 24 hours, my patience just ran out. Getting on trail early in the morning is pretty important to me because it is when I thrive on the trail. It’s my time to hike. I wanted to make sure this day had at least a part of that morning grind in it for me. I thought I would just get myself above tree line and then wait on everyone. When I walked to the ranger station to see who had already left/ was about to go leave for the summit, Doc and Fish followed. While Fish was getting his permit, I decided to hit the trail. It was 8am when I signed the trail register to begin my summit.

I began my hike in all of my winter clothing. As expected, I ended up stripping it all off to my base layers as I warmed up. I had to cross a cascading stream/ waterfall where the bridge was out. There was an alternate route around the crossing but I thought it didn’t look too challenging to cross. All I had to do was take a giant step over it, pretty much completely straddling the water, and then pull myself up a rock on the other side. I’m not sure why the crossing seemed to be a huge deal to the park and other hikers who left comments on the Guthooks waypoint. I continued the climb up to tree-line and eventually Doc was hiking with me. At one point I realized I needed to grab more water because I wouldn’t find any on top of the mountain so I ended up filtering water from run off that was directly on the trail. At least the flow was good! As we got closer to tree-line the boulders kept getting larger and larger. Then the trail turned more into a scramble instead of a “hike”. 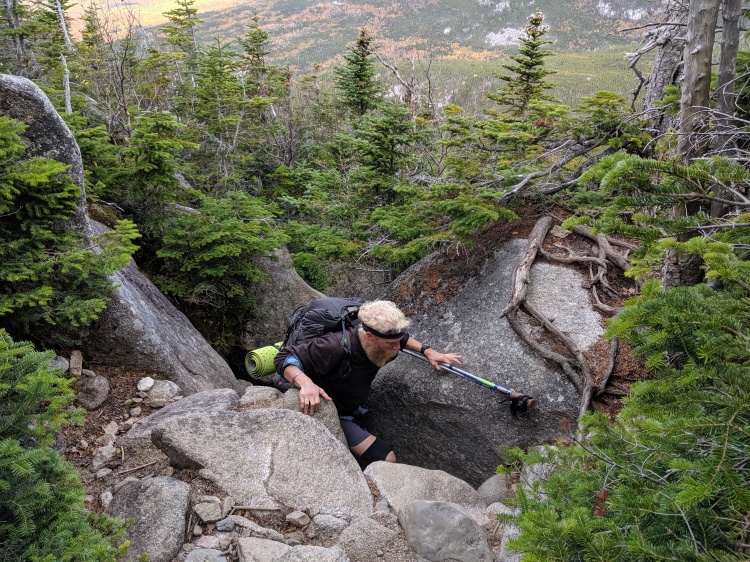 Once above tree line I could see the mountains in the surrounding valley along with a blanket of colorful trees interrupted by small lakes such as the one I canoed on yesterday. It was a pretty great moment to feel that I was finally on Katahdin. I continued climbing up the mountain and several times there were rebarb metal rungs of some sort to help pull yourself up the rocks. The whole climb up I was wondering how I would get down. Doc and I took at least two breaks to wait on Sponge and Fish to catch up but they never did. I was ready to sit and wait an hour if we needed to. Doc pointed out that the clouds in the distance were rolling towards us. It didn’t take me any more persuasion to continue hiking and just go straight to the top. 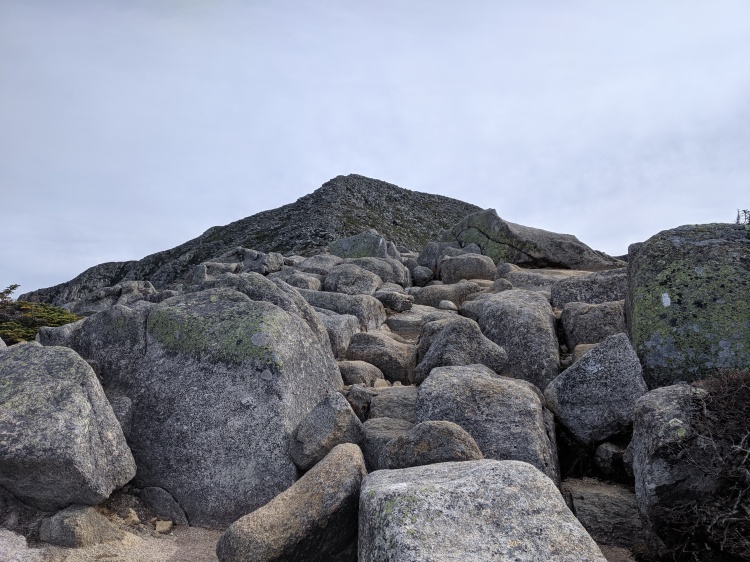 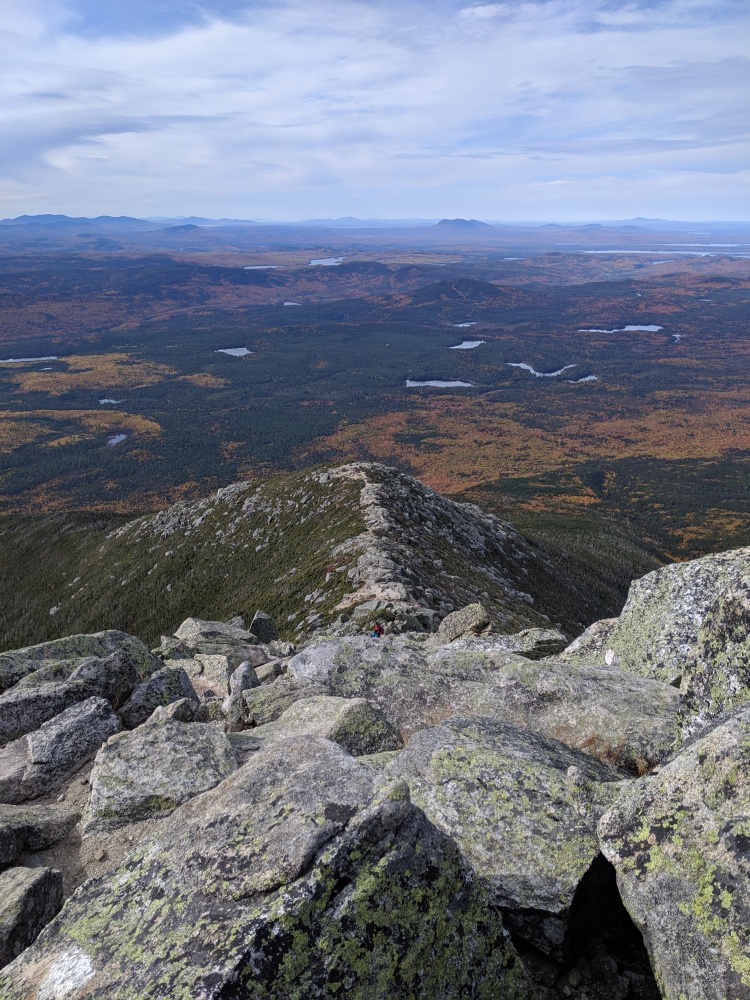 There was a very steep false summit that lead up to “the table lands”. At the top of the false summit the mountain flattened out until a final smaller climb to the true summit. The wind was blowing strong, the rocks on the path were large, and the hike felt epic. In the distance the sign and people hanging out on the summit came into view.

Suddenly I was standing in front of the sign and it was all over. I did it. I hiked the Appalachian trail from Georgia to Maine. I earned the coveted title and joined the 2,000 mile club. 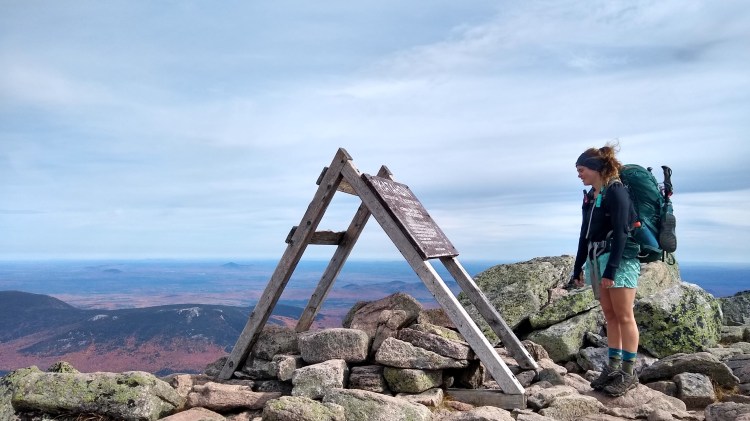 There were a few tears that formed but overall I just felt emotionless. I think I already cried all my tears about this journey coming to an end over the last 100 miles. I felt more empty than accomplished. I gently touched the face of the sign to connect my footsteps between the first white blaze on Springer Mountain, Georgia to the last white blaze on Baxter Peak, Katahdin. 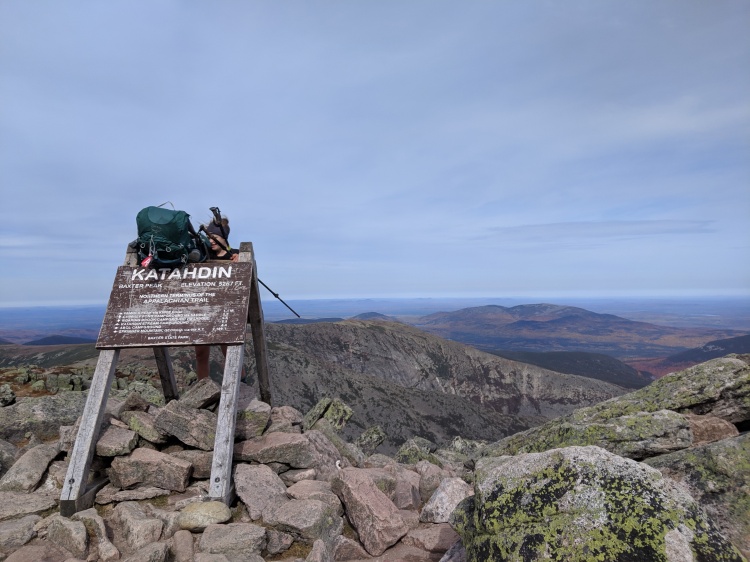 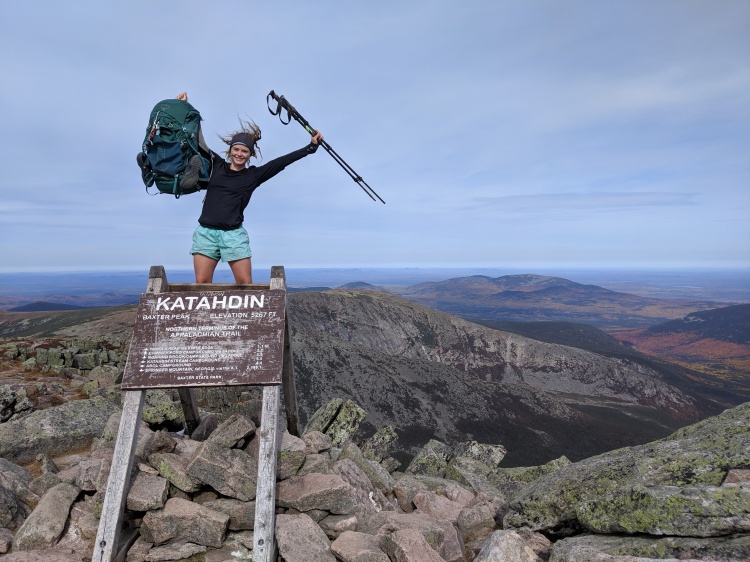 There were a few other day and thru hikers on the top and we all just sat around enjoying the view, eating food, and savoring the moment. Eventually I walked back over to the sign to get my summit pictures. This morning we were all joking about how today is “picture day” like in elementary school when you wore your best outfit and made sure your hair looked good. When I got to stand on top of the sign, a sense of completeness and confidence that I’ve never felt before overwhelmed me. I was a little surprised by this because of how empty I had felt standing in front of it the first time. I was probably more in shock that the journey was over more than anything else.

Eventually sponge and Fish showed up about an hour later. Everyone got their pictures and cheered as some more thru hikers came up to finish. One of my favorite finishes to watch was Godspeed who started running faster and faster with his arms up in the air as he approached the sign and then gave it a hug and several kisses upon arrival. Everyone was clapping for him.

So I could just leave you hanging here but you’re probably wondering how I got off the mountain. For the sake of getting this last post published and completing my Appalachian Trail Journal, I am going to continue the details of my hike off the mountain down Knife’s Edge in a different post.

I want to say a thank you to everyone who has followed along this journey in various ways. Having the support of others has helped me stay dedicated to writing my blog. I have never been able to be this disciplined about journaling my whole life until now and I still can’t believe I did it. There were so many days I struggled to produce this content as I was laying down in my tent utterly fatigued and often riddled in foot pain wishing I could just fall asleep and not have to reflect upon my daily occupations or miss out on time connecting with my fellow hikers. Writing this blog has been a very rewarding experience and I’ve come to notice the ways I have developed as a writer since the beginning.

I apologize for the delay in the publishing and creation of this last post. To be completely honest, returning to civilization hasn’t been easy at all. Sometimes I wonder if it is the hardest part of everything that has happened. Anyways, stay tuned for some future posts and reflections upon the trail and life afterwards.