This is a link to the map I am referring to throughout the post. Pictures are at the end.

After two different plans to go backpacking fell through, my friend Caroline and I found three days that we could go backpacking at Zaleski State Forrest in Ohio. We knew it was going to be cold since it was December, but we wanted to experience what it was like to go backpacking in the winter. Turns out it wasn’t as cold as we had expected it to be. I think I may have backpacked in colder conditions on my last trip to Shenandoah. We were extremely lucky that it didn’t rain a drop this trip!

We began at the school house backpacking trail head marked as point A on the map and camped at backpacking camp #2 marked as point I. When we were getting ready to hit the trail at the school house a car of people pulled up and let us know that it was the last day of hunting season. I was nervous but we were the only ones at the trail head so we proceeded. In retro spect next time I would bring an orange hat or clothing item. Once we were on the trail hiking I felt fine. It seemed to me that I could see through the forrest very well and would be able to clearly tell that we were people traveling through the woods and not animals.

It was a VERY muddy first day. I slipped and fell in a big pile of mud twice that day. The beginning of the trail was blazed very well but the closer we got to point I the less blazes there were. I was familiar with the trail so far as my first backpacking trip ever was here. We saw one person on the trail that day and it was the only person we saw the whole trip. He was smart and wearing a bright orange long sleeve shirt. He had a backpacking pack on and told us about the trail we were about to traverse. We came to the conclusion that he was day hiking with his pack due to the timing and location in which we met him and the details he told us of the trail.

The first night we ate rice and tasty bites Indian sauce packets for dinner. Two lessons learned here #1 make sure you buy instant rice or it will take forever to cook and #2  tasty bites are not a great food to bring backpacking. We both only ate half of our meals and the trash bags smelled strongly of terrible Indian food the rest of the trip. We both decided that this meal only tasted good the first time we were on trail because we were so hungry. Never again will I voluntarily bring this meal on trail. It is also expensive for backpacking food at $3 for a packet of sauce!

The temperature stayed in the 30s that night and both of us were pretty warm. It sucked that the sun set at 5pm so we went into the tent SUPER early. I stayed up till past midnight listening to some coyotes howling before I fell asleep. We read through the trail register and laughed at how much people complained about the mosquitoes. We had zero bug issues since it was so cold outside. The campsites had outhouses and surprisingly still running water which was so nice. It doesn’t take much to make a backpacker happy with a simple luxury! I was worried we would have to cache water but it was not needed at all. Even if the pump had not worked there were abundant streams everywhere!

We hiked from camp at point I to camp at point P. Again it was VERY MUDDY and we both took some falls. I felt like going home halfway through the day and when we got to point K on the map I said something to Caroline. I told her this was our chance to either go home or continue on for one more night. We both decided to continue on. Later that night when we were talking in the tent we found out that we had both wanted to go home at that point and didn’t want to ruin it for the other person.

After we made it to camp at point P we set up our tent. It was 2 pm so we continued hiking on without our packs to do the northern loop. Part of the trail had been rerouted. I hiked the first 2.1 miles of that loop (counterclockwise) very fast in hopes that we could do the whole loop. When we finished the 2.1 mile section to the road we were shocked it had still taken us an hour! We thought we would hike much faster without packs on. At this point my body was so exhausted and I was very thirsty since I didn’t carry water for this part. We decided to take the road and skip the 2.7 mile section above it. It was about a 10 minute walk before we hit the trail again. This 2.0 mile section of the trail was very poorly blazed and went straight through a mud filled ravine. I thought I was going to lose my boots in the mud a few times. There was a point that we almost got lost because of the poor trail markings. After wandering around a bit and figuring out where we were on the map we found the trail again. It is always in the most remote section of a park that the trail is poorly maintained and clearly not used as much.

At camp we made mac and cheese and cheesy hash browns for dinner. I think this will always be one of my favorite trail meals. Again we went into the tent super early since it was dark and we wanted to stay warm in our sleeping bags. We talked about how bad we wanted to go home and how much more we had to hike the next day. We both agreed that we would have night hiked out if the trail wasn’t a mud pit and we were a bit closer to the car. We made plans to cut the trip short the next day by hiking the road back to the car. The temperature was supposed to get down to 25 degrees that night but we were both so warm that we felt warmer than the first night!  There were less coyotes howling that night.

On this trip I wanted to practice using the hiking poles my mom got me for Christmas. At first it felt very awkward and I was frustrated by them. They felt like random extra weight in my hands that wasn’t helping me. At one point I gave Caroline a pole to help her get down a hill. We ended up each hiking with only one pole the rest of the trip. I am SO GLAD we had the hiking poles. I definitely would have fallen several more times without it. The mud was so slippery I was constantly using the pole to balance. The poles were also a great help going up hills as well when I felt like my legs couldn’t lift my heavy pack. Although I thought the poles were super unnecessary for a small trip like this I think they played a huge role in making it more enjoyable. I will always bring my poles from now on, even if it is a short trip!

Caroline and I both had sleeping bag liners and thought they worked fantastic for the trip! We both have the Sea to Summit Reactor Extreme. It seems really thin and I was questioning how it would really make my bag that much warmer. When I was using it I felt that it made a huge difference in the temperature range of my bag. Would definitely recommend it to anyone who is going camping in the winter. 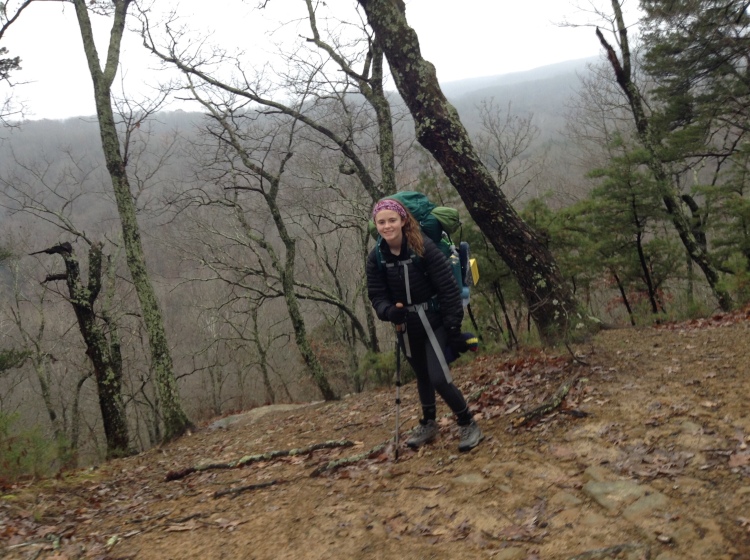 We were surprised to see how bright green the moss was in December. The green was highly contrasted against the brown colors of the dead forrest. 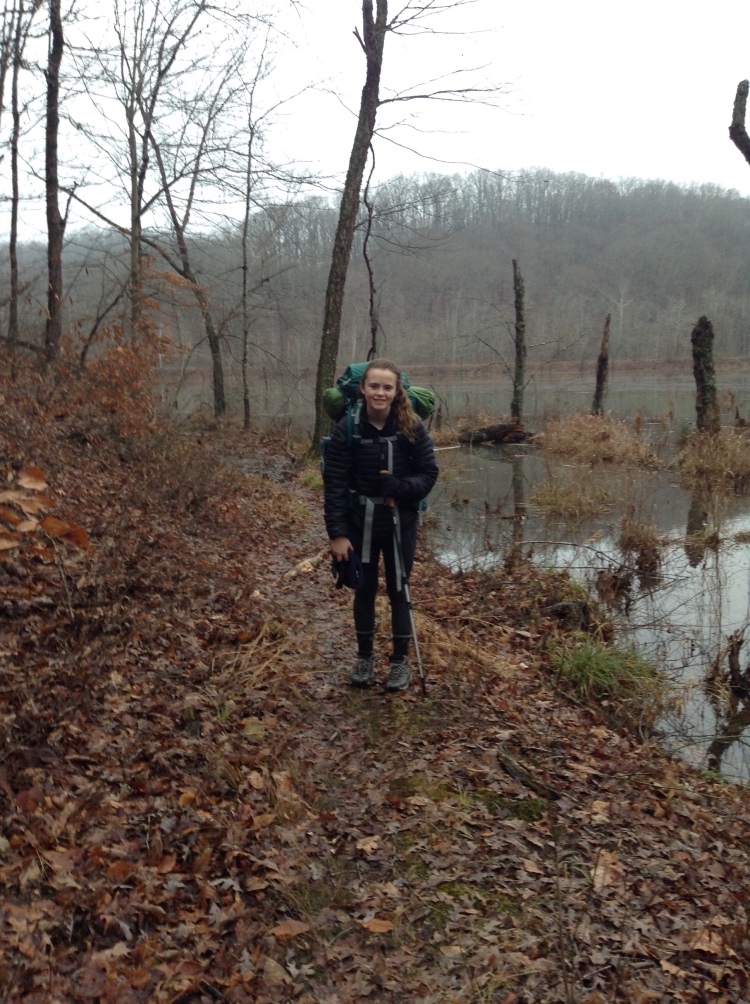 Beavers (assumedly) gnawing away at the trees! This is the first time I have ever seen this, I thought it looked cool.

Caroline pointing at the trail that had turned into a stream. So thankful for waterproof hiking boots. 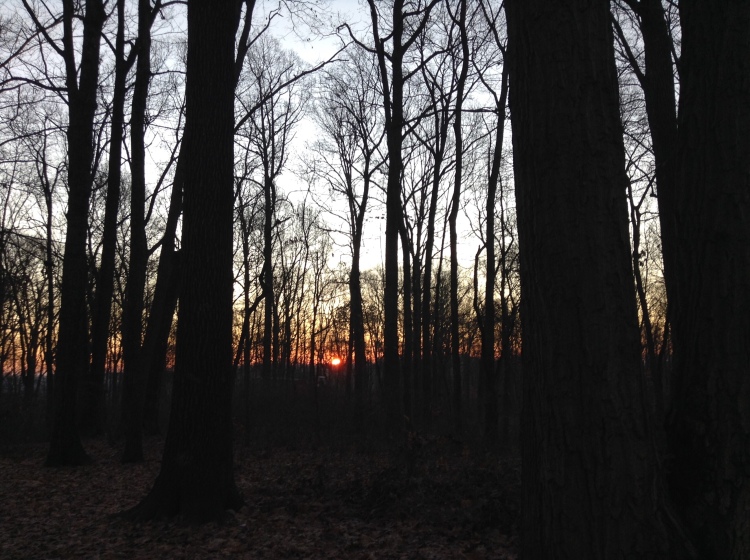 The sunrise after night #2 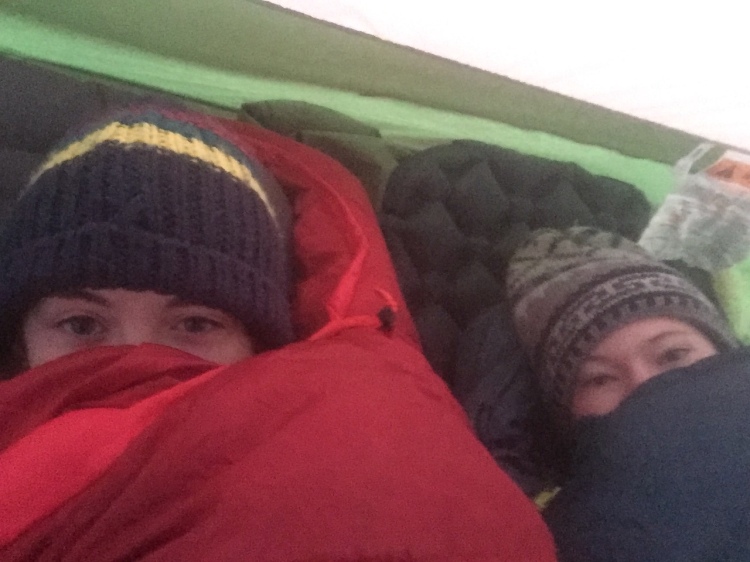 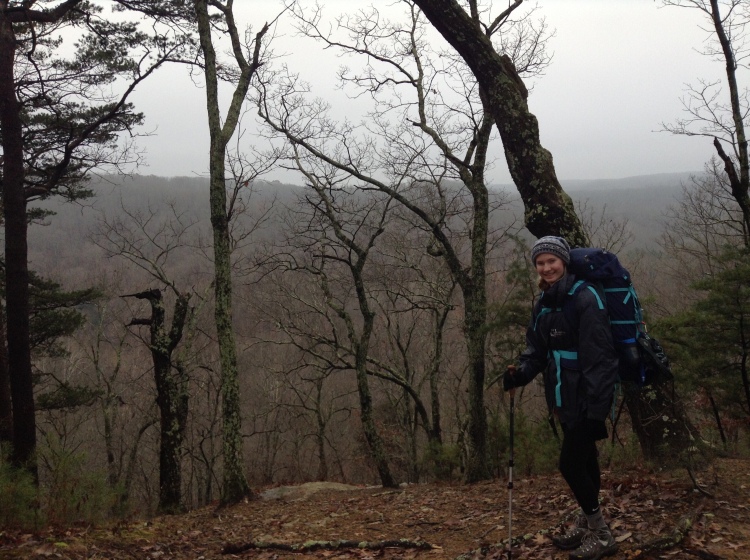 Caroline at one of the only view points on the trail.