This morning I woke up at 6am and got on trail before 6:30. I had a 7 mile hike until I reached the road I was supposed to meet Emma and Crunchy at, at 10:30am so we could hitch a ride into town to go to the pizza buffet that opens at 11AM. My hike alone was great. The trail was nice to me and my feet. There were no sharp rocks to stab me and the uphill elevation was very gentle and not steep. I got to the trail head at 8:45AM happy that I had some time to relax by myself before they showed up. A hiker came to the trailhead driving another hiker who was slackpacking. He offered me a ride into town and I told him I was waiting on my friends who would be there at 10:30. He said he would come back later to see if we all needed a ride. I was thankful I secured us a solid ride into town without even trying. Shortly after that Emma and Crunchy showed up. I was so confused how they had gotten there so early. Turns out they left earlier than they said they would and ran the first 4 miles to my campsite as fast as they could. I’m so glad I left earlier than I said I was because I would have still been sleeping and very angry that I had to worry about catching up to them all day. The whole point of me hiking on alone was so that I could have a shorter day into town without worrying about hiking fast and I could be alone. Crunchy went to the road and stuck out his thumb so we could try to catch an earlier ride into town. It was a great spot to catch a hitch because there was a large pull off area for cars. The first car that passed him immediately pulled over to the trail head parking area. Three young hikers we had been following all week jumped out of the car. I couldn’t believe the chances. It made me laugh so hard. Turns out the one hikers parents came to town to visit him and bring him a food resupply. Their parents happily offered us a ride with them back to town. Not only that, they wanted us to take the left over food their son and his friends didn’t take so we did! I got half of a resupply for free! They dropped us off at the Bastian gas station because it was 10:15 and the pizza buffet across the highway didn’t open yet. At the gas station I bought a few more snacks for the trail. 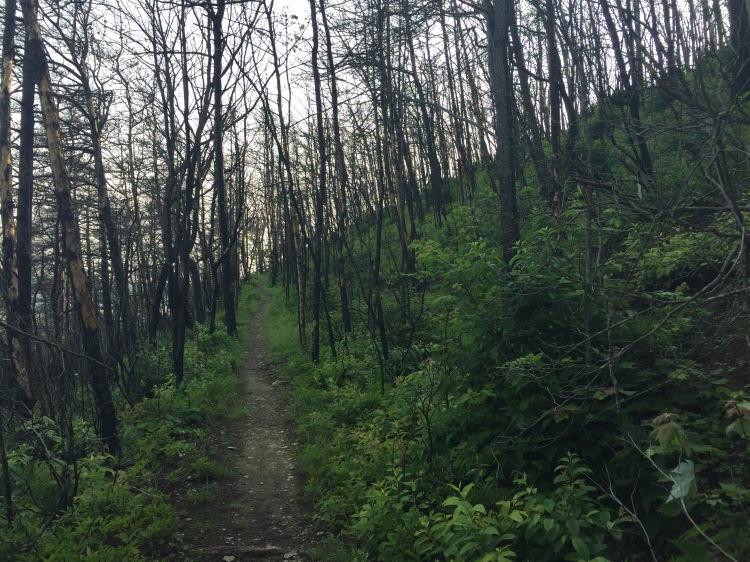 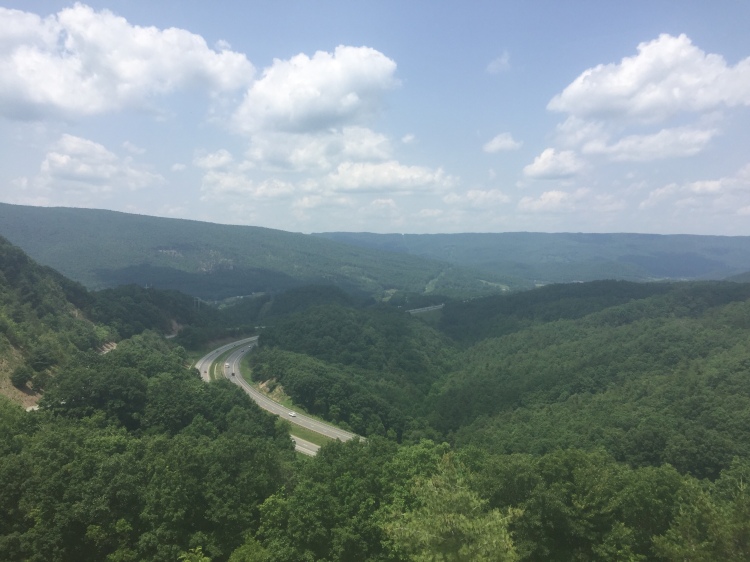 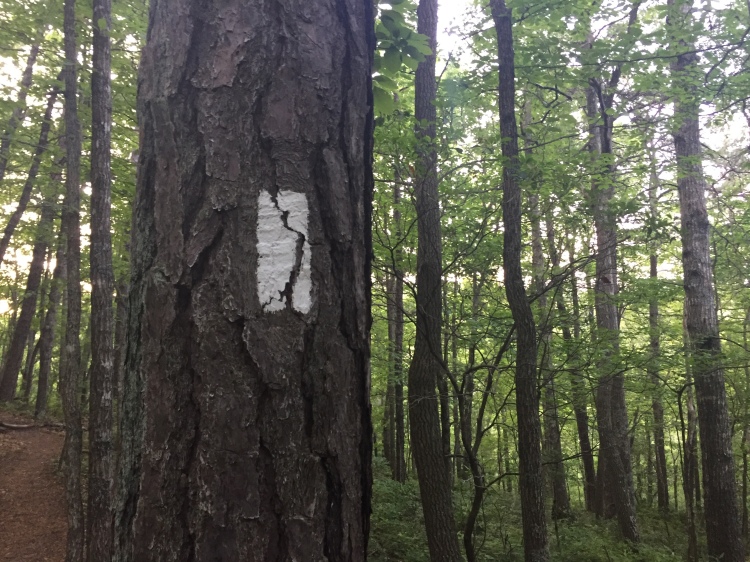 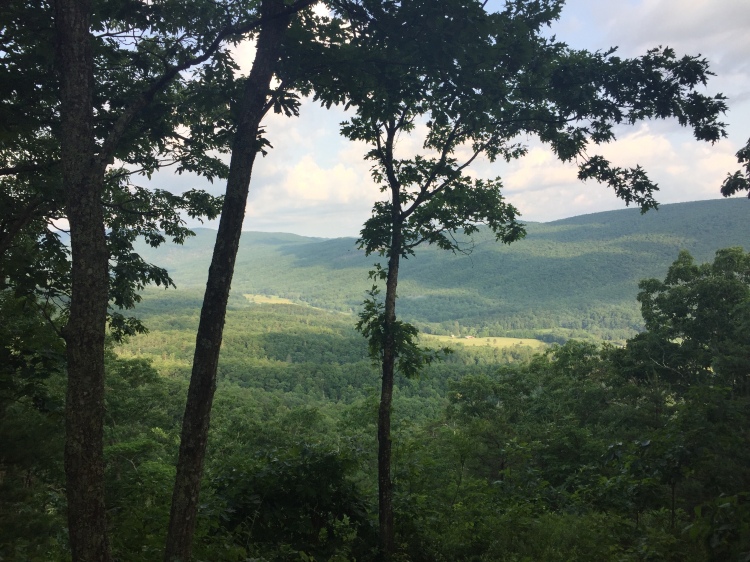 The pizza and salad buffet was great. I ate as much as I possibly could and caught up on my blog posts since I had time and good service. We were there for about 3 hours before we got a ride back to the trail from a couple at the restaurant who offered us one in the parking lot. They knew right where to take us. The seemingly difficult hitch hiking situation into and out of a tiny town on a Sunday morning was easy!

Back on the trail we walked over highway 77 on a bridge before we entered the woods. We filed up our waters and hiked to the first shelter 2 miles away before we took a break. We laid down for a while enjoying the sunshine and digesting our food before hiking 9 more miles to the shelter. Before we took our break I was able to witness one of the coolest things I will ever see. As I was hiking uphill alone I ran into a mother deer and two babies that were lying down on the trail. The mom was immediately alerted of my presence so I just stood there and watched as she tried to get the babies to move. The one began to stumble along behind her but not without extreme difficulty. The second one remained still in the middle of the trail with its legs all folded up. I kept nicely yelling at them to move but the one remained in the middle of the trail. The mom ran farther away but the babies were struggling. I got close to the lying one to get a picture yelling the whole time to get it to move. I felt so bad getting so close to it, almost as if I wasn’t being respectful to the wildlife. As soon as I bent down to take a better picture the fawn tried to get up but it immediately fell over down the side of the trail. It laid down in the bushes to hide so I said goodbye and kept on hiking. The second fawn and mother were still ahead of me. I was really worried about getting attacked by the doe because I have heard surprising stories about deer getting aggressive. The second fawn fell down and into the bushes on the side of the trail and remained hidden as well. The mother kept walking north down the trail. I was wondering how recently the fawns had been born because they were so small and fresh looking. All of a sudden I stepped over the doe’s placenta laying in the middle of the trail. The fawns has just been born in the past 20 minutes ( because people passed by me 20 minutes ago) and I just witnessed their first steps! It was so cool. I will post the pictures of them but they aren’t great. I can’t believe I got to see such a unique moment! 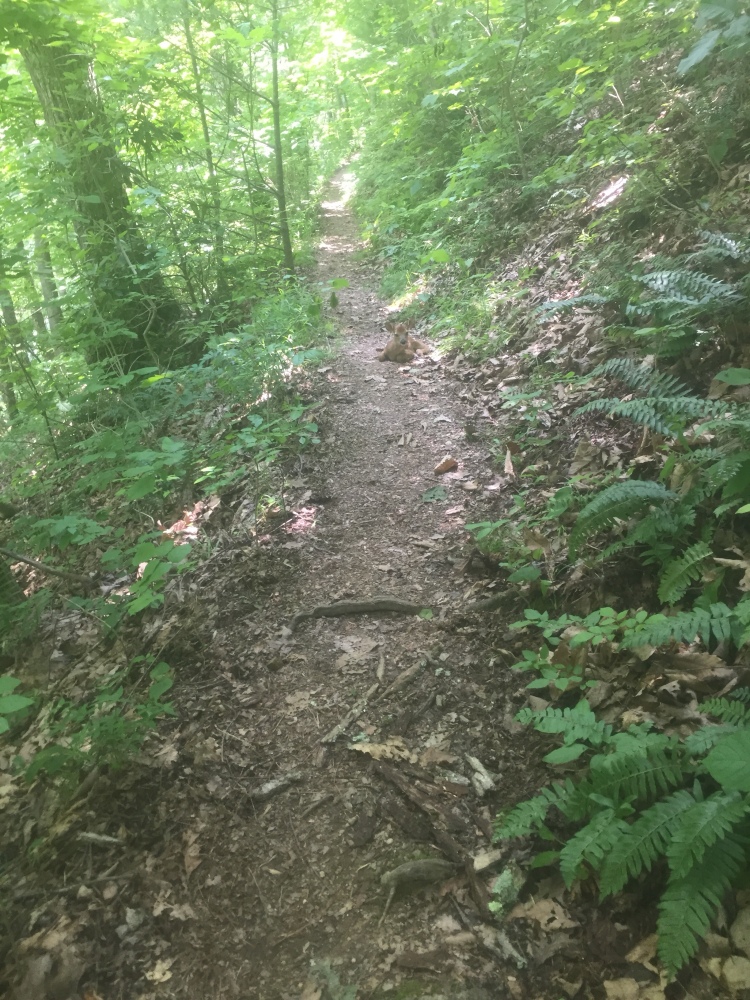 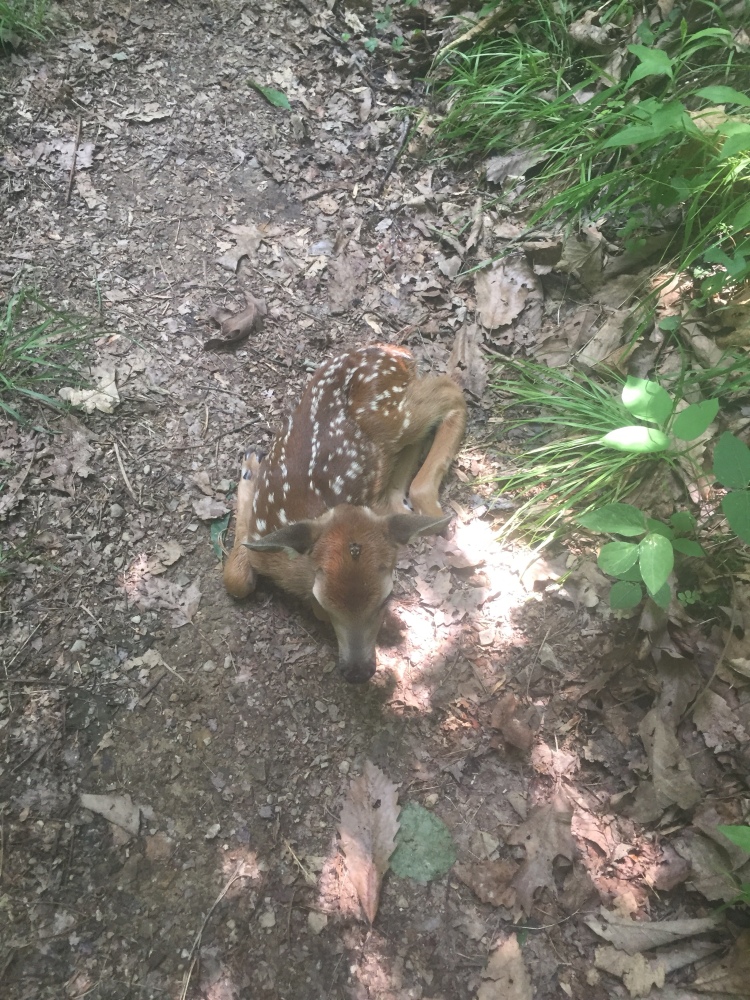 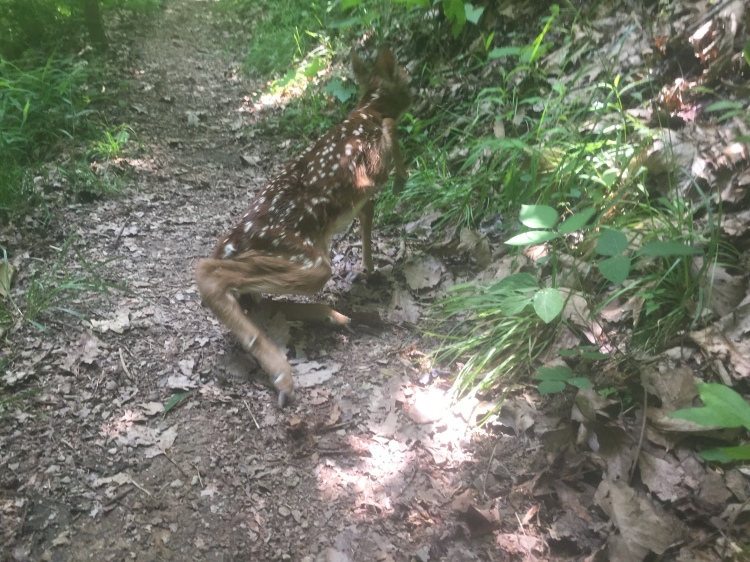 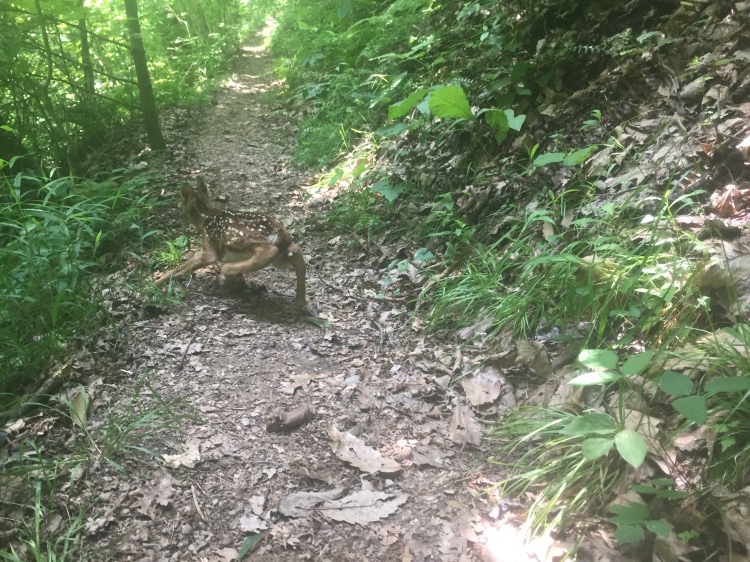 At the shelter there were so many tents. This is the largest group of people I have camped with in a long time and I was frustrated. I like the camps with only a few people at them. I pitched my tent in a rocky spot and hoped it wouldn’t rain since it was thundering with dark skies for the past hour. Luckily it didn’t. 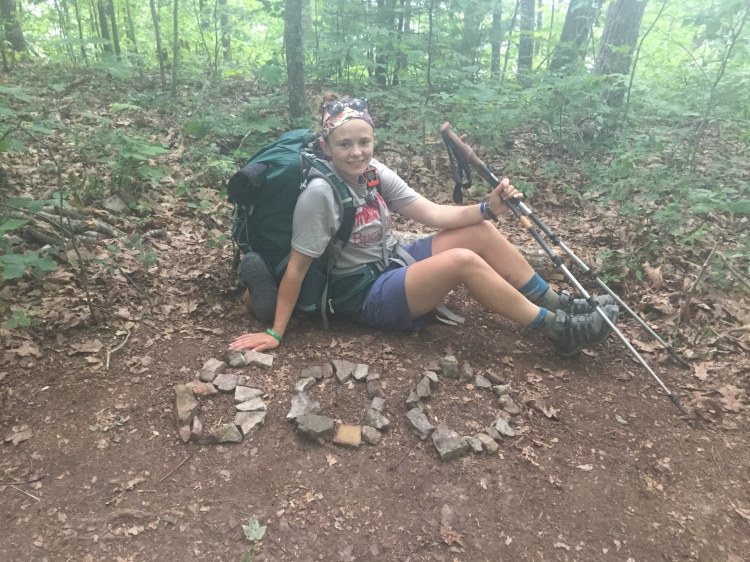