This morning I woke up a little before 8am and got my pack and cot packed away. I ate some cereal at the church before I left at 9am with Toucan and Fancy Feast. Toucan and I went to a diner called Weasie’s for breakfast. Fancy Feast went to the library to do some stuff she had to get done. 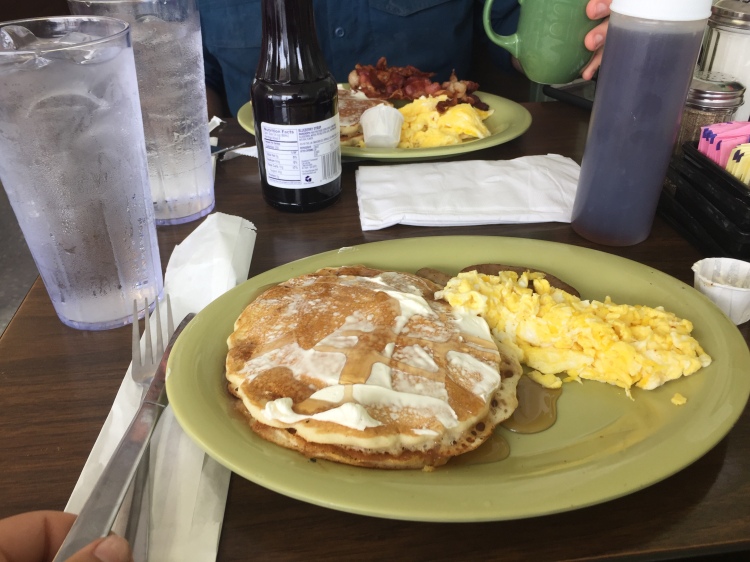 When I was walking around town in my shoes with my new insoles my feet were still hurting super bad. After getting breakfast I bought some chocolate, fresh fruit, and gauze at Kroger. Toucan and I then went to the pavilion at the park to hang out and wait for a Kombucha bar to open that we really wanted to go to. Fancy Feast joined and we all got a hitch hike to the place together. Blue Ridge Bucha is a kombucha brewery that gives thru hikers a free 12 oz pour. The person that runs it was a former thru hiker and their location is just off the trail in Waynesboro. I had a ginger flavor Kombucha and I think it’s the best I’ve ever had! They had all of it on tap.

The person who gave us a hitch to the Kombucha place and then back to the trail is a local trail angel named “Katz” after the character from “A Walk In The Woods”. He was extremely nice and spends his days during May and June driving hikers from the trail to town and back. Waynesboro has been one of the most hiker friendly towns I have visited on the trail so far! People in town were offering us rides back to the trail when I was walking to the store without me even asking or sticking out my thumb. A list of designated trail angels post their phone numbers at the trail head so that hikers can call them for a ride. Katz gave us a business card he made with a list of all the waysides with mile markers (places to get food) in Shenandoah National Park, it will be super helpful!

Katz dropped us off at the trail head around 1:30pm. Less than a half a mile down the trail we entered the National Park and had to fill out permits at a self registration station. We will walk through Shenandoah National Park for 105 miles! I have been so excited for this part of the trail for a very long time. Shenandoah is my favorite National Park that I have some great memories at. The park is very long and narrow with a road driving down the center of it called Skyline Drive. The trail crosses the road a great deal going back and forth from one side to the other. Shenandoah is supposed to be the easiest and flattest section on the whole trail. I was very excited to walk through the park in four days and do my longest day of hiking ever. I really wanted to do a 30 + miler here, but with my current condition it won’t happen. I’ve decided I need to keep hiking for two more weeks with low milage before I make a decision about what to do about my extreme foot pain. I had a lot of encouragement and help from people today who have been in my position before. I talked to a girl who just finished her thru hike in Massachusetts last week because she had to get off trail for at least two months and flip hiking directions to heal her feet. I also talked to a girl I shared a room with back in North Carolina who had plantar fasciitis as well. I was relieved to hear she is still on trail a little over 100 miles behind me but it sounds like she is still going through a lot of pain. At least hiking slow will give me more time to spend in my favorite National Park! I remember meeting a woman at the camp-store in this park less than two years ago who told me how she hiked the entire length of the park. I thought she was crazy to walk 105 miles and I didn’t even realize the Appalachian Trail ran through the whole park. The first time I visited this park I came as a day hiker with my best friend and boy friend. To this day Old Rag mountain in the park (not on the AT) is still my favorite mountain climb in Virginia. The second time I came to Shenandoah I was on a two night backpacking trip ( my longest at the time) where I met my backpacking partner named Caroline who has done two sections on the AT with me now. I will add a picture of me on Old Rag and my first backpacking trip here below! Both of these visits were in October so I am excited to see this park in a new season. 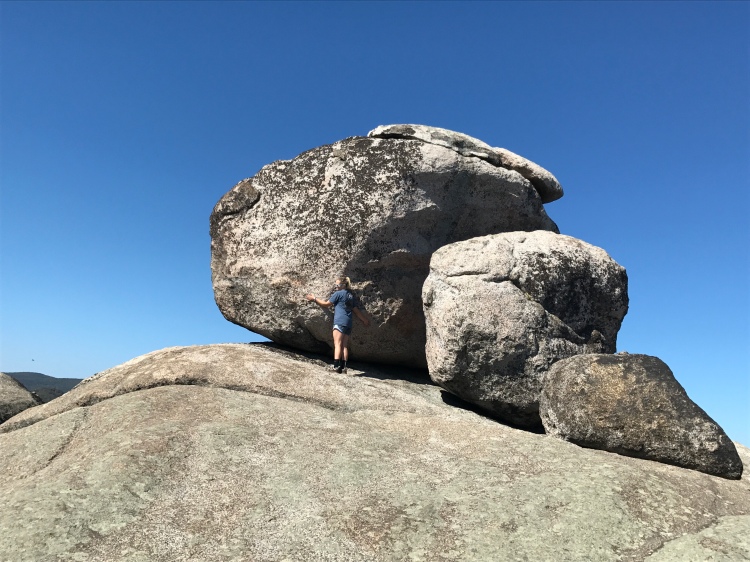 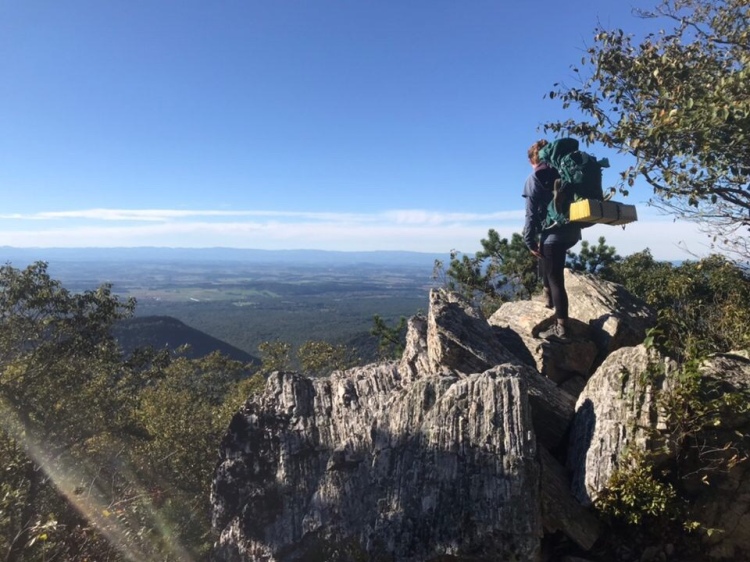 The above pictures are me on top of Old Rag Mountain for my first visit to the park, and then the second two pictures are of me on my first two night back packing trip and hike on the AT ever! It was a lot colder in these pictures than it is now. 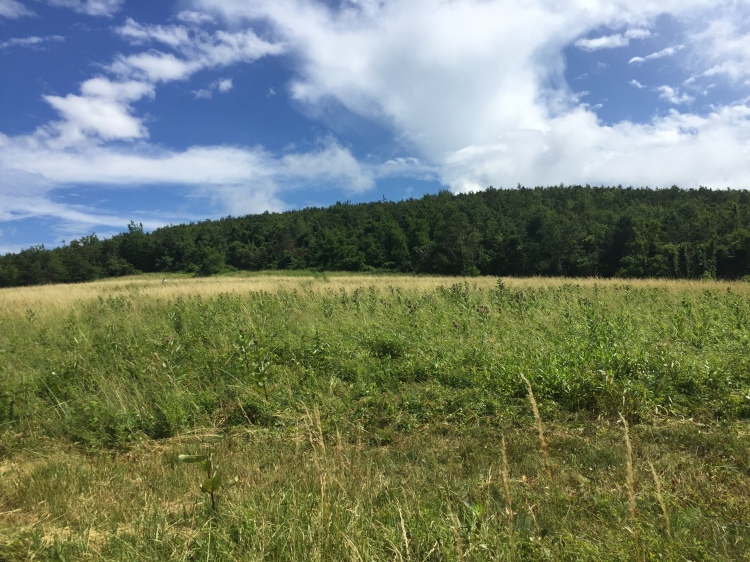 On my hike in the park my feet were still hurting incredibly bad. I called my dad when I took a break and then I ran into a couple doing trail magic so I took another break. The couple (Sockless and Blazes) were from Cincinnati Ohio and did a thru hike of the trail in 2014 to celebrate their 10 year anniversary. They had two young children with them, the oldest of which, I learned was their trail baby! I loved getting to hang out with them. Blazes encouraged me to keep hiking with my PF to see if it gets better. They told me I was doing everything I needed to be doing right now to get through it. I felt better about my feet possibly getting better after talking to them. Their kids were so cute! They were on their way home from vacation and wanted to spend some time in the park hiking and doing some trail magic. They gave me some watermelon, water, and Oreos. Thank you Sockless and Blazes for the advice and encouragement!

I only had to hike three more miles to the shelter and I hiked along a 55 year old retiree named “Hobo ” who is also from Ohio. There are an absurd number of people from Ohio out on the trail this year! It seems like one in ten (if not more) people I meet are from Ohio! Ohio isn’t even a state the trail runs through which is even weirder. At the shelter I got a spot and ate an avocado and orange for dinner along with my chocolate I bought at the store today. A hiker named Red Feather found a mushroom called chicken of the woods which I’ve been wanting to try for a while. He picked a lot of it so I boiled it for us to eat and it tasted really good! I shared the shelter with Toucan, Red Feather, Nature Boy, Fun-shine, and Honorable Leech. There were some other hikers too but I didn’t get to talk to them. In this national park the shelters are known as “huts” and we have to hang our food on bears poles. To do this you have to hang your food on the end of a long heavy metal pole and then pick up the pole by the end to hang your food up on a taller pole. It was very heavy and I almost fell over trying to do it. I wasn’t holding the pole from the very end so I wasn’t tall enough to hang my bag. If I did grab the pole by the end I would be just tall enough but it also would have been a lot harder. Someone ended up helping me but it was entertaining to watch everyone else try. The other girl at camp kept dropping her really heavy bag from 15 feet in the air and it eventually ripped from her dropping it so much! Someone else had to help her too. I did my calf stretches and used my golf ball before I fell asleep but my feet were still hurting. I hope I wake up and it’s gone tomorrow. I plan to hike about 15 miles or less everyday in the park. I’m trying to only stay at the shelters since the bear activity here is very high and I’m scared to camp anywhere else! 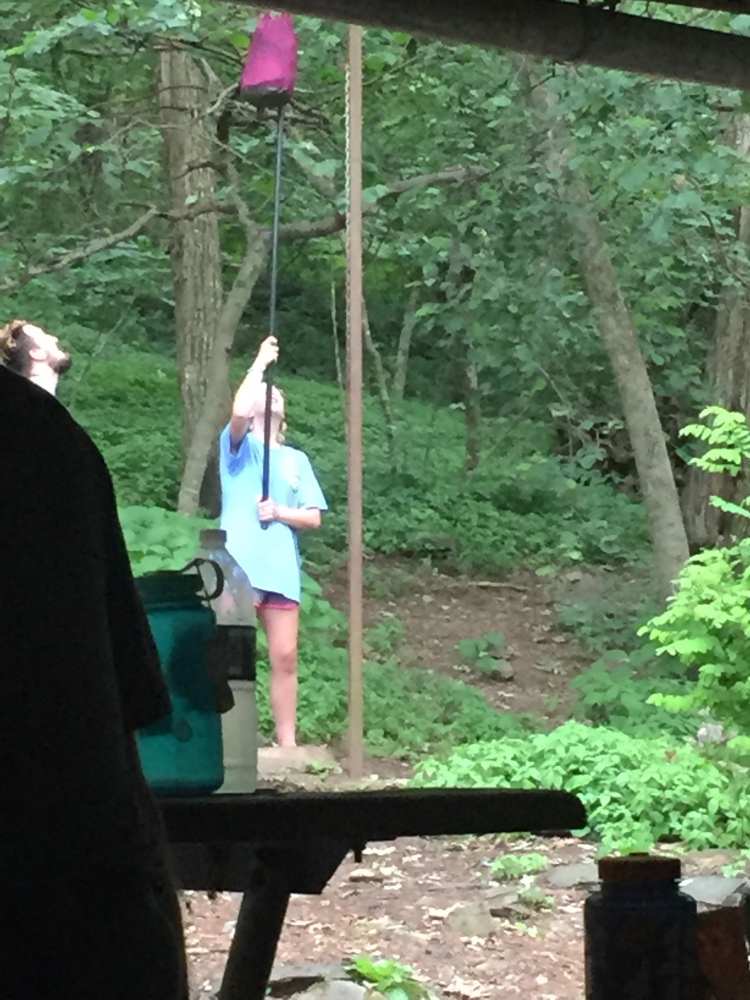