This morning I woke up and my feet were still in awful pain. A girl named Fun-Shine knew I was injured and helped me by taping my feet a special way for plantar fasciitis with KT tape that she had. So kind! Everyone out here is always willing to help each other out. I hoped the tape would help more than it did. I ended up removing it two days later without being able to tell that it did anything.

I officially entered the national park (Shenandoah) this morning. Here all the shelters are called huts and all the trails are marked with concrete pillars that have trail directions listed in a metal plating. Some of the trail that I covered today was a repeat of the first miles I ever hiked on the AT. Last October (2018), I did a three day/ two night backpacking loop partially on the AT in the southern half of Shenandoah with a group of women from Ohio State University. I remember being so excited to be walking my first steps on the trail I very much wanted to thru hike some day. Little did I know I was only one month away from officially committing to doing so. I remembered many details about the trail as I walked northbound, including each spot I stoped to rest and the parts I was getting to know my friend Caroline who has become a solid backpacking partner. Caroline has now completed two week long sections of the AT with me and a two night trip in Ohio.

I stopped at Black Rock Mountain Hut in the late afternoon around 3pm. I camped with Frog, Fancy Feast, Lionheart, Luna, Siu-Siu, and Red Feather. I was shocked to see Lionheart again because the last time I saw him was during my first week on the AT which I completed in March. He is hiking with his two dogs and does a lot to take care of them. This includes taking many many zero days and driving his Jeep around. He parks the Jeep at the south end of a section, hitch hikes north, then hikes southbound to his car and repeats this for the whole trail. This will be his second thru hike of the AT with his dogs if he finishes this year. It was hard getting to camp so early now when I wanted to keep hiking. Thirteen miles is now a short day for me, but I need to cut back my milage to help my feet heal. I convinced Frog and another girl named Platypus, who was continuing on to the next shelter, to hike 1 mile out of the shelter to the top of Black Rock Mountain to watch the sunset. We didn’t end up getting to see the actual sun set. Since it looked like rain was coming we headed back early. We did sit at the view for almost over an hour. I knew this was a great view from seeing pictures and I didn’t want to risk missing it, if there was bad weather in the morning. This was my favorite view that I got in the national park. It was almost 360 degrees of mountains that are close enough to see the detail in the ridges. This is one of the reasons I love Shenandoah and what I think makes the park look so pretty. Of all the mountains in Virginia, these are my favorites. 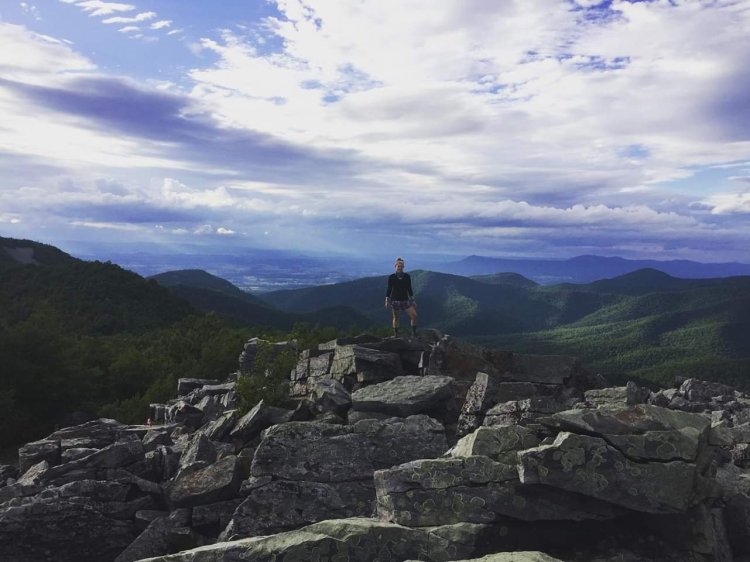