This morning I left camp at 7am. I planned to do twenty miles today which was further than I wanted to go, but my only other shelter option was eight miles, which was way too short of a day to be acceptable to me. In the Shenandoahs, I only want to camp at the shelters and preferably inside them with other people because I am so sacred of the bears. In the first hour of hiking I passed the 900 mile marker. Four different people took time to make interesting mile markers out of rocks, sticks, and leaves. I love getting to see them. It makes me feel accomplished every time I pass one. Shortly after this, I received a text from Fancy Feast, who is ahead of me, that there was great trail magic happening at a road north of the next shelter until mid afternoon. This motivated me to hike faster this morning to be sure not to miss it. I took an one hour break at a view and pressed on to the trail magic stopping to pose for a picture at a view just before it. 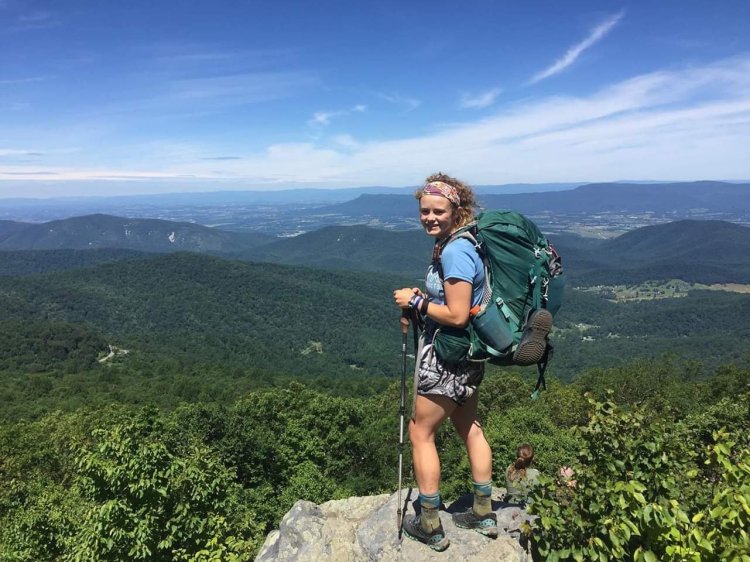 When I came down the mountain to the trail magic I was so impressed to see a whole tent set up with camping chairs. This was the first time I had seen a trail magic set up like this since Georgia. I was greeted by a past thru hiker named Wiki ( class of 2014) and his father. They have done this exact same trail magic at this same trail head 3-4 times per year every year since Wiki finished his hike. There was hot, home made chili for us with all the toppings such as cheese, hot sauce, and fritos. Wiki made sure he gave me a heaping bowl. He was laughing at me because he knew just how hungry I was. They also had cold drinks and sweet snacks. Along with my two bowls of heaping chili, I also ate some cookies, skittles, chocolate milk, and sweet tea. I sat at the trail magic for a little over two hours hanging out with Wiki and all the other hikers that came in. They said that they served around twenty hikers that day and that they were doing the trail magic until three. They wanted us to pass on the information to the hikers behind us, like Fancy Feast did, so that the hikers wouldn’t stop at the view on top of the mountain to eat a full lunch before hitting the trail magic. We were totally spoiled! This was the best on trail, trail magic I have received since I started my hike. I am so thankful for the company and kindness of Wiki and his father. After Wiki completed his hike, he wanted to give back to the people on the trail to make up for all of the help he had received along his journey.

At the trail magic I met a father and son hiking duo named Waffle and Hawkeye. They have been on the trail since February, which is crazy to me. Because Hawkeye is only 14 and going into 9th grade, the pair has faced many challenges that most of us out here don’t have to deal with. After getting to know Hawkeye, I am amazed at his father’s patience to make it this far on a long distance hike with his son.

I ended up hiking eight more miles after the trail magic without water by mistake. I planned to stop and get water from a spicket at a picnic area, but when I stopped the water had been turned off due to low supply. I was so frustrated, hot, and thirsty. I had to go three more miles before I would reach the next spring. It really sucked to go that long on a hot day without water, but it wouldn’t kill me. I was so happy to reach the spring which was also right before the shelter.

Tonight I camped with Frog, Waffle, Hawkeye, and Broadweigh.