Last night was the worst night I’ve ever had in a shelter. The mosquitos were crazy. I was constantly batting them away from me in my sleep and the buzzing noises would not stop. I thought I was going crazy from hearing bugs so much all day, but Memorial confirmed my senses telling me he thought it sounded like a buzzing bee hive inside the shelter. He was right. I woke up at 5:30 despite wanting to sleep in more because I couldn’t take the mosquitos anymore.

I put on some of my Sawyer Picardin Bug Repellent lotion that I won some samples of in a giveaway. I am curious to see how the lotion works in comparison to bug spray. I am so tired of soaking myself with DEET. I have decided that I will at least buy some sort of natural bug spray at the next town that I go to. The lotion smelled really good and it seemed to keep the bugs at bay initially. I will let you know how it goes for the rest of the day!

When I got on trail, I wore my Chaco sandals for the whole 16 miles to town. I was feeling good this morning despite some foot aching. In town I would get my brand new trail runners and throw away my old ones. I was going to keep my old ones to wear around the house or town, but they are so torn up I won’t even wear them anywhere so I am going to get rid of them. The plan was to get my new shoes 200 miles ago but I messed up which post office they were going to so it took a lot longer and my shoes got worn out to the max. Today, I just didn’t even want to bother wearing them one last time because it feels like all the foot support is gone in them anyways.

There were lots of little surprises on trail today that I wasn’t expecting. I had to skip most of the cool things I would have taken my time at because I had to do 16 miles to town by 5pm. At one road crossing, I randomly read in the comments on my mapping app that there was a vending machine hiding 0.1 off the trail, so I bought myself a cold can of coke. I also passed an outdoor shower with a charging station. I didn’t want to pass up the free shower, but I knew I wouldn’t make it if I stopped and it was completely exposed to the road. There was an awesome swimming hole I passed at the base of a water fall called “Great Falls”. When I walked by there was a weird amount of people there and I could tell something was going on but I had no clue what because no one said anything to me. I found out a little bit later from another hiker that they were now rerouting people around the area because they had recovered a body of someone who had downed in the falls last night. It was really sad. My sister and her friends were swimming in that same spot two days ago! 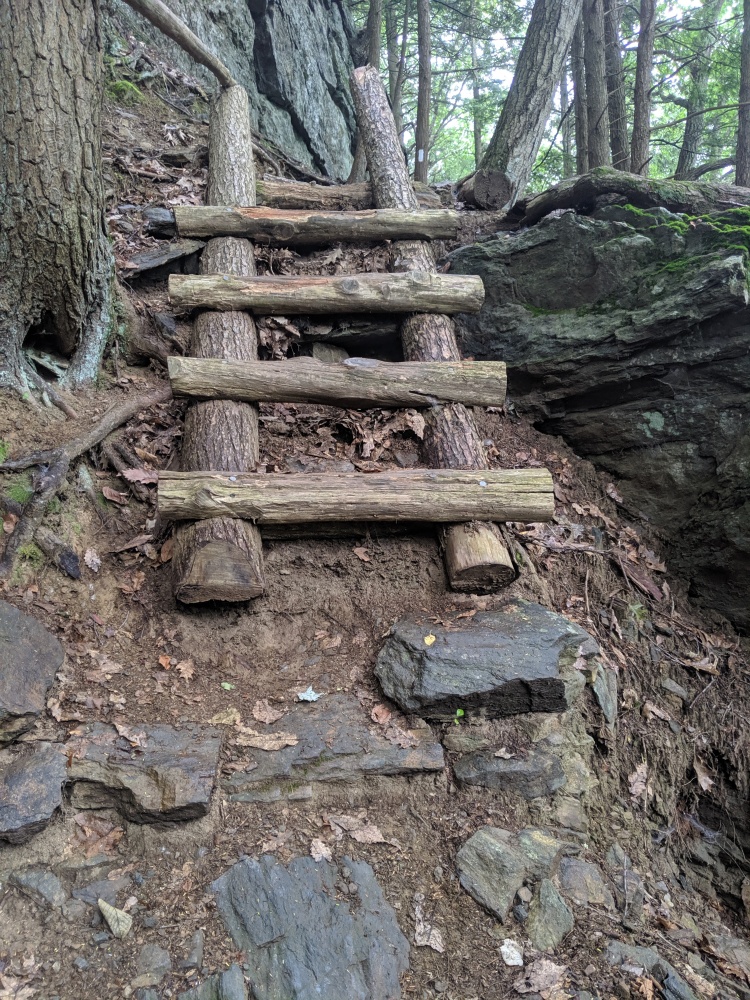 I took a long lunch break half way to town. It was mostly to rest my feet and eat more of my food. The trail seemed really nice today despite a few climbs. A lot of the trail went though a pine forrest which is my favorite kind to walk though. Right before town I passed the 1500 mile marker before slipping and sliding in my sandals down a very steep descent. Then I walked 0.7 miles down the shoulder of a busy road before reaching the post office where I received my shoes. Next I got some natural bug spray and a soda from the general store, before going to the library where I charged my phone and updated my blog from one of the computers.

I left town around 4pm and hiked 4 miles to the shelter. I climbed lions head where there was a great view and I noticed that the mountains are getting bigger again! I was the only person sleeping in the shelter. I thought about setting up my tent but felt lazy. I hope I don’t regret it because of the bugs again. I think my bug repellent lotion worked awesome but I only had a few tiny packs of it and ran out. I used a ton of the natural bug spray that I bought at the general store in town. I already know I will be buying a bigger bottle of it in the next town along with a bug net.