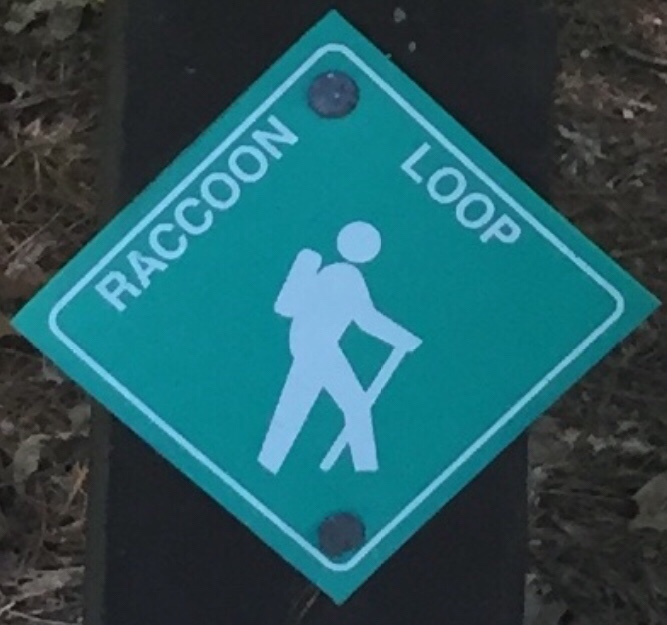 I had been begging Emma to go on some sort of camping trip with me all summer. I was very happy when she told me she’d like to try backpacking for a night! She doesn’t have any of her own equipment so in order for this to be possible she borrowed Jeff’s backpack and sleeping bag. Thanks Jeff! I was looking at various different places to go and found Raccoon Creek State Park in PA. It was probably the closest place we could’ve gone. The drive was only 1.5 hours from our house in Bolivar, OH.

Raccoon Creek has a designated backpacking loop that is 19.5 miles long (we definitely did 20 by the end). I knew this would be kind of long of a trip for us but Emma was willing to do it. I had to reserve us a backpacking campsite on the loop. Our options were between Sioux or the Pioneer backpacking campgrounds. I chose the Pioneer campground since it was located way closer to the half way point on the loop than the Sioux campground was. Camping fees were $5 a person per night for us out of state people ($4 in state) plus a $6 reservation fee (Annoying!) so I paid a total of $16 for our site. When we got to the state park we stopped by the office and on the outside they had a map, our permit, a car hangtag for overnight parking, and a little campsite reservation paper all ready to go for us. 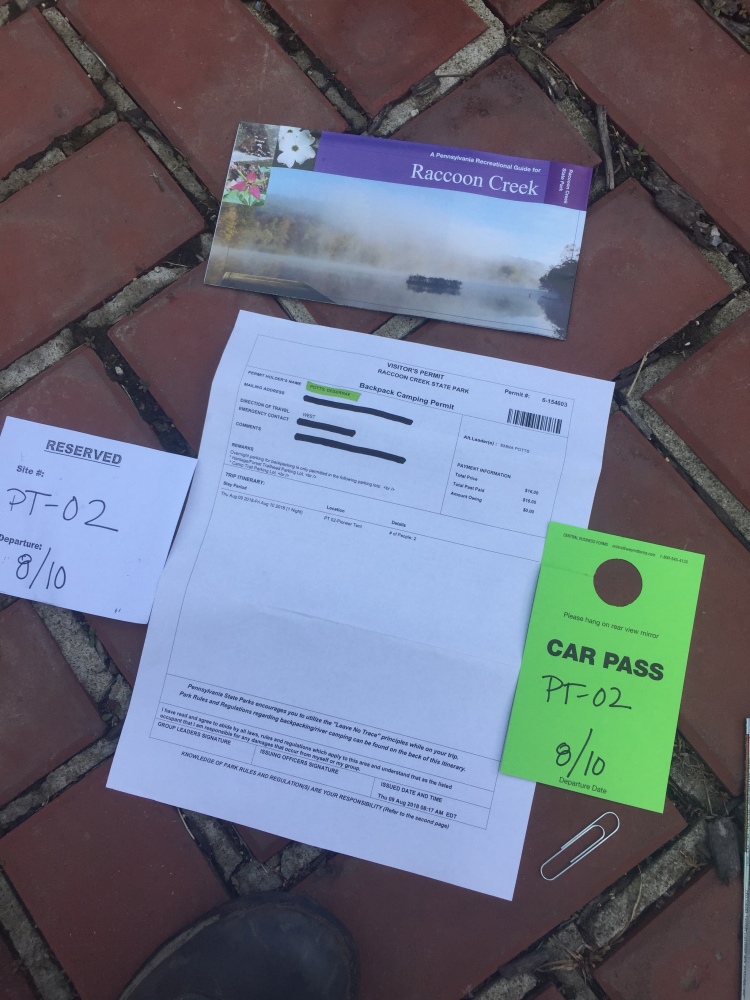 We parked our car at the Heritage Trail trailhead. Our route was hiking the perimeter of the park clockwise starting with the Heritage Tail (9.5 miles), then the Appaloosa Trail, and lastly the Forrest Trail (6.2 miles). We started hiking at 12:50 pm.

The Heritage trail is considered “most difficult hiking” by the park. I can agree that it was difficult hiking. It started out an an uphill climb. I wish I had an elevation map of it. The first 4.5 miles of the trail to mineral springs was great. Emma and I both felt good, the trail was very nice and taken care of. We passed through a super cool area with tall skinny pine trees. When we got to mineral springs I really wanted to go see the spring but knew we could afford the time it takes to hike the extra miles.

Some interesting plants I saw along the heritage trail. 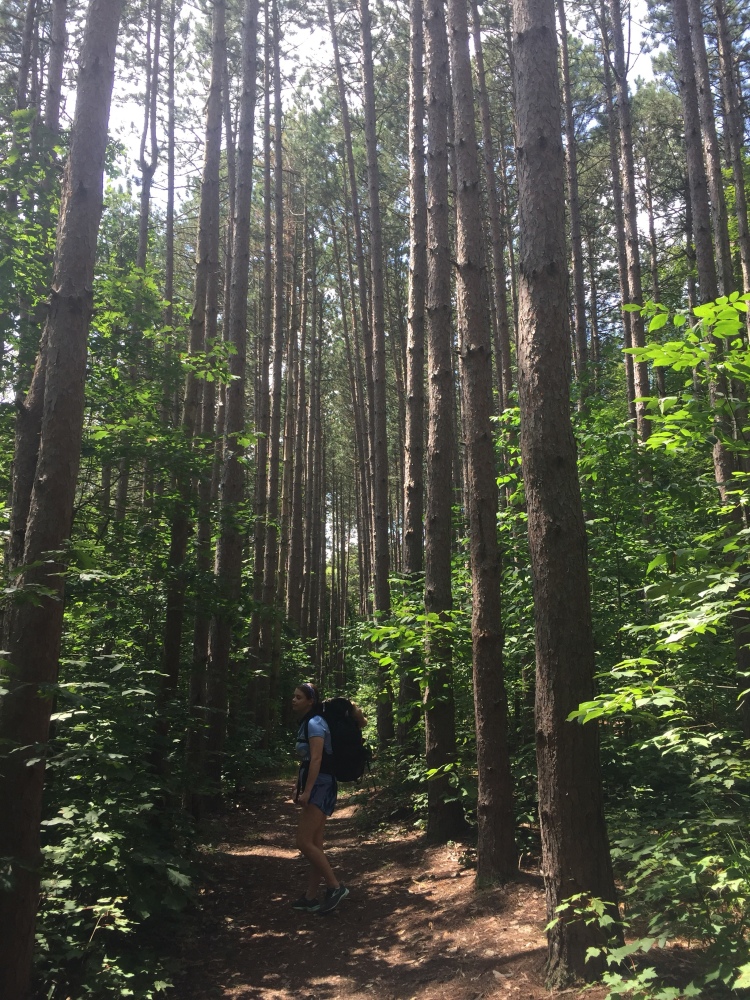 Emma on the Heritage trail in the cool pine tree area.

Mineral Springs also had some cool ruins of an old building. 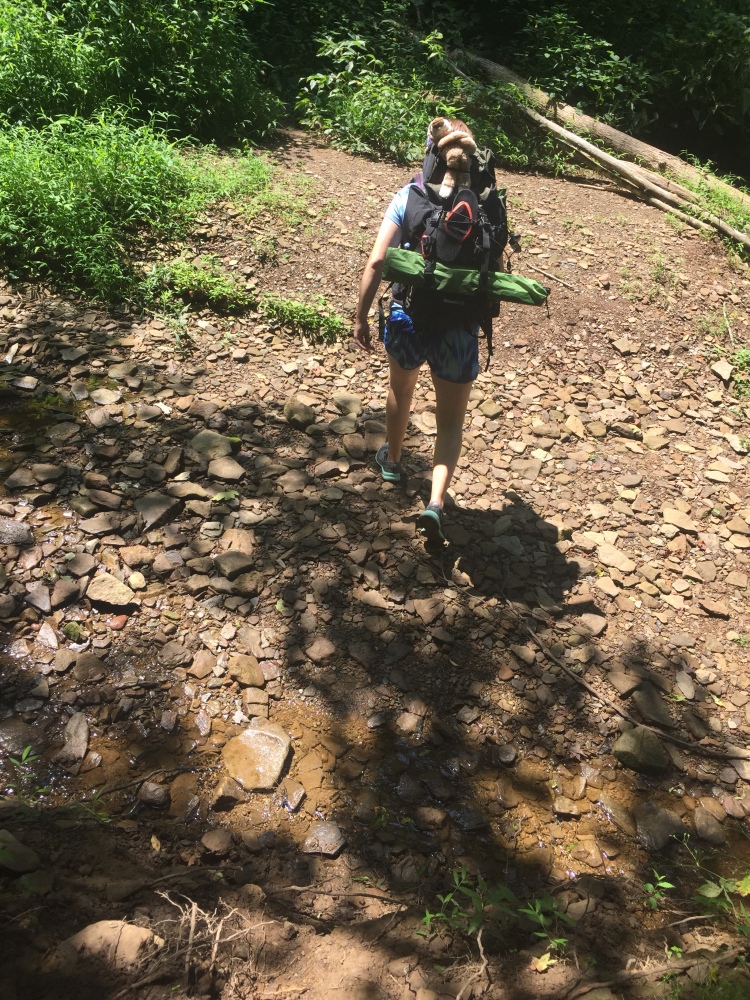 Emma on the Heritage trail. 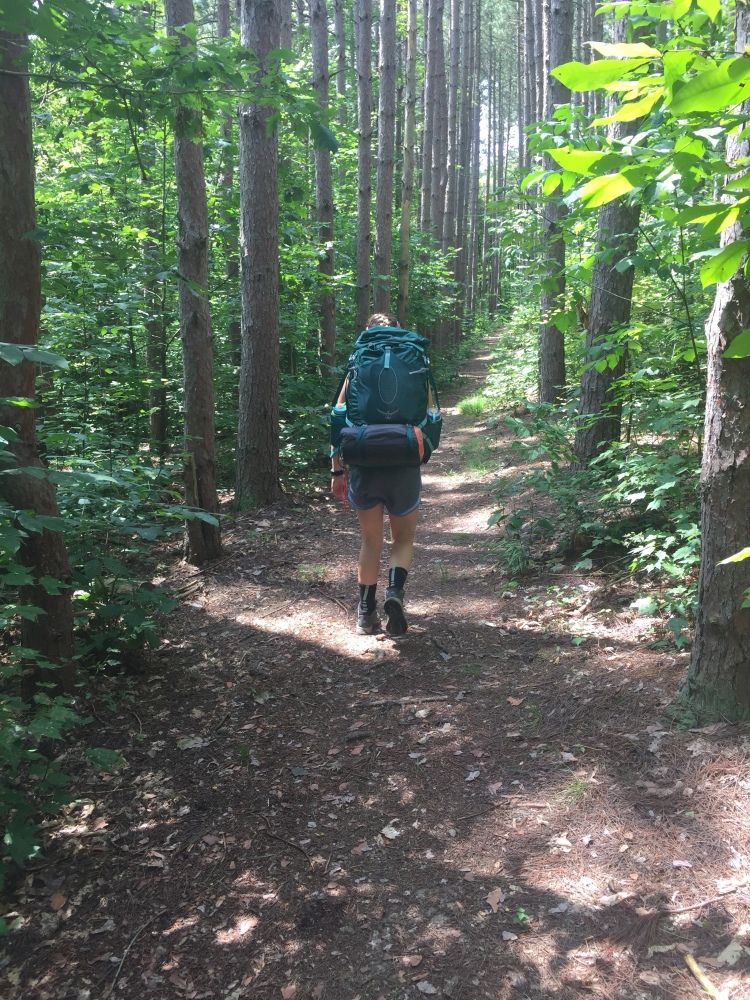 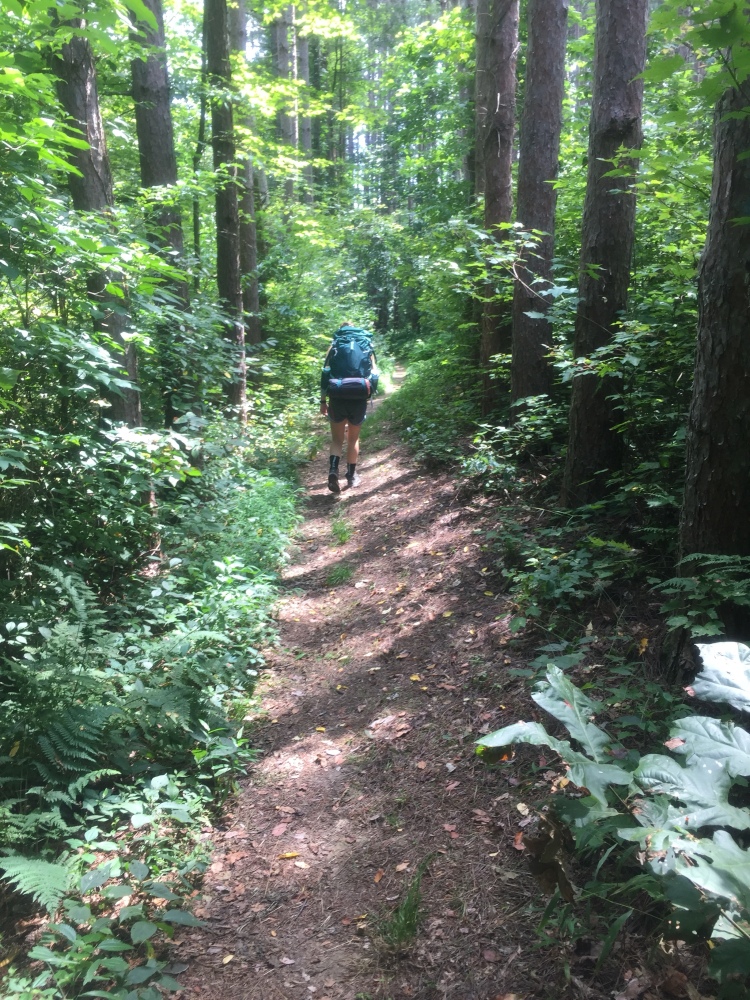 Me on the heritage trail.

After mineral springs we continued hiking on nice trail for another mile; at five miles the trail became really over grown. At 5.5ish miles Emma’s GPS watch died so we based all our milage from here on on time. For the first five miles all of our mile times were between 20 and 25 minutes each. The overgrowth on the last half of the Heritage trail was really bad. It made sense because the trail went around the back side of the park where there aren’t as many places to go. Emma and I were both DYING by the time we got to mile 8ish. We still had four more miles to go to camp and it was getting darker out. I was hiking pretty fast to get there in time. When we finally got to the Appaloosa Trail we found that it wasn’t as overgrown anymore. We think this is because it is also used as an equine trail. For being a horse trail it was narrower than I had expected.

We arrived at camp at 6:30 pm. The first day was roughly 12 miles and took 5.5 hours. At camp we had reserved tent site #2. After looking at the other tent sites we took tent site #1 because it seemed flatter and had a bench by the fire ring. We knew that no one else would be coming to camp tonight because we saw only one other reservation ready at the camp office and we got to the camp so late there was no way anyone who was ahead of us wouldn’t be there yet. The park also offers some nice Adirondack shelters to rent out as well. They were very nice looking but I wouldn’t like to stay with one wall open. 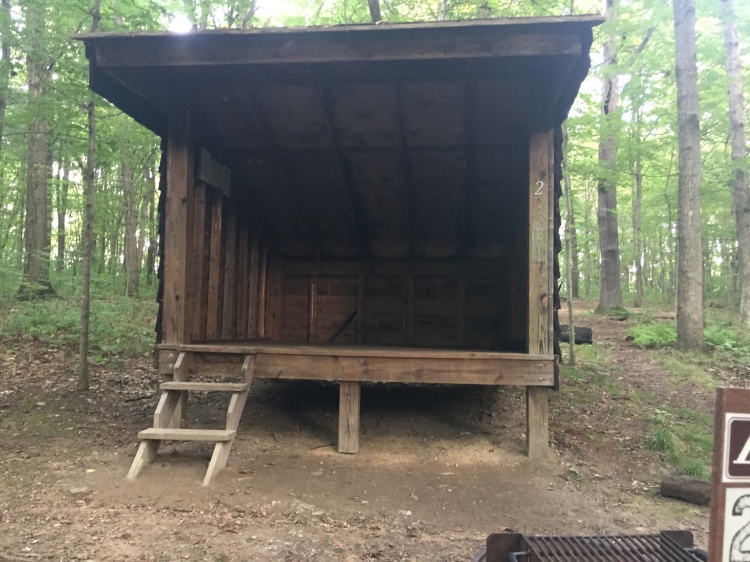 One of the Adirondack shelters available to rent.

We set up our tent and began to cook dinner. We made Velveeta mac and cheese and used the let over cheese to add to some dehydrated hash brown mix. This was the first time I had used these potatoes for camping food and they tasted great!

After dinner I surprisingly found a sign that said there was water and restrooms! I was excited because I didn’t think we would be able to get more water until we made it to the Sioux camp. I wish the park was more clear about there being water at the pioneer campground. We had to hike about a quarter mile to some group tenting sites to get to a water pump. I had to pump the water really hard and it took a while to get some out. I’m glad there were two of us because I don’t know how someone could have pumped and filled up alone. The water came out with a brown tint so we used my sawyer squeeze to filter it before drinking.

When we were filtering our water back at camp around 8:30 another lady arrived. She was alone and camped in a hammock. She said she came from the same way we did. She found our little sloth that we had been carrying with us. We had no idea that we had even lost him! He had to of fallen off Emma’s backpack in the last mile to camp. 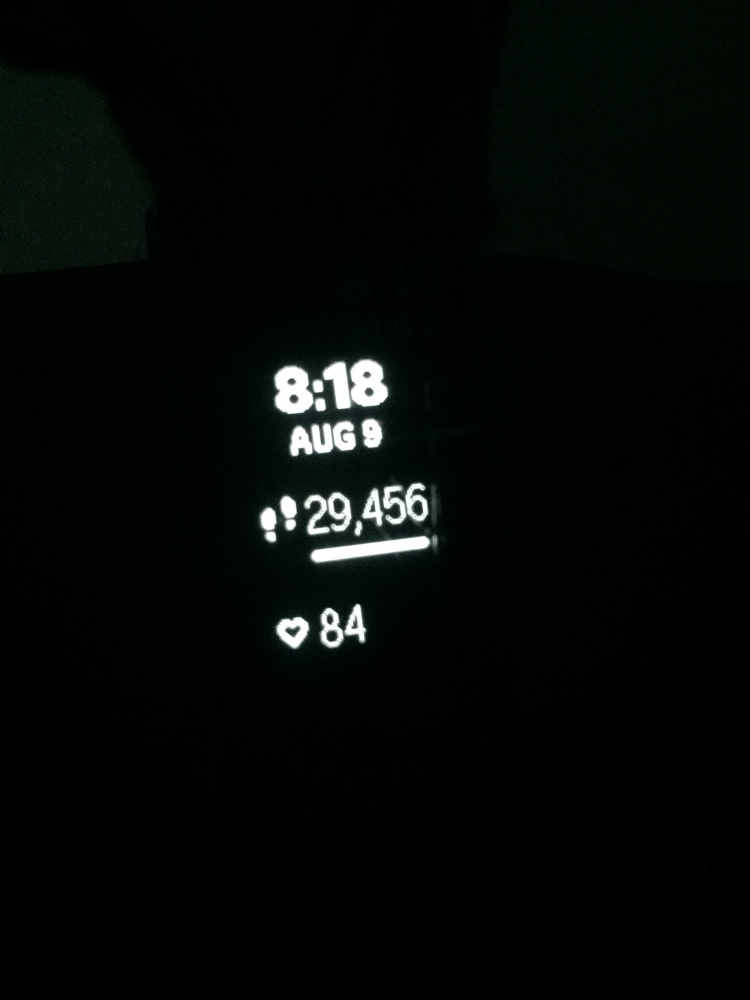 How many steps I had from our first day according to my Fitbit.

We got into the tent around 8:30-9pm. The food was kept inside the tent but we had our packs sitting right outside with their rain covers on. I was using my new blow up pillow I just bought for the first time but I was still getting a really bad headache. I found out that if I put the pillow on top of the food bag it was high enough to be comfortable but the pillow was very slippery. I barely slept all night. The nearby road was VERY loud until 1am and there were also many airplanes flying over as well. I thought we heard so many airplanes because of how close the Pittsburgh we were. I was listening to the forrest sounds all night and I swear I’ve never camped and heard a louder forrest. I was really paranoid again about food being in the tent and our packs being outside. At 5:30 am Emma wanted to get up to go to the bathroom and then we finally started getting breakfast ready around 6:30am. For breakfast we ate some hardboiled eggs we made at home and boiled water for oatmeal. It started raining as we packed up and we hit the trail again at 7:30am. 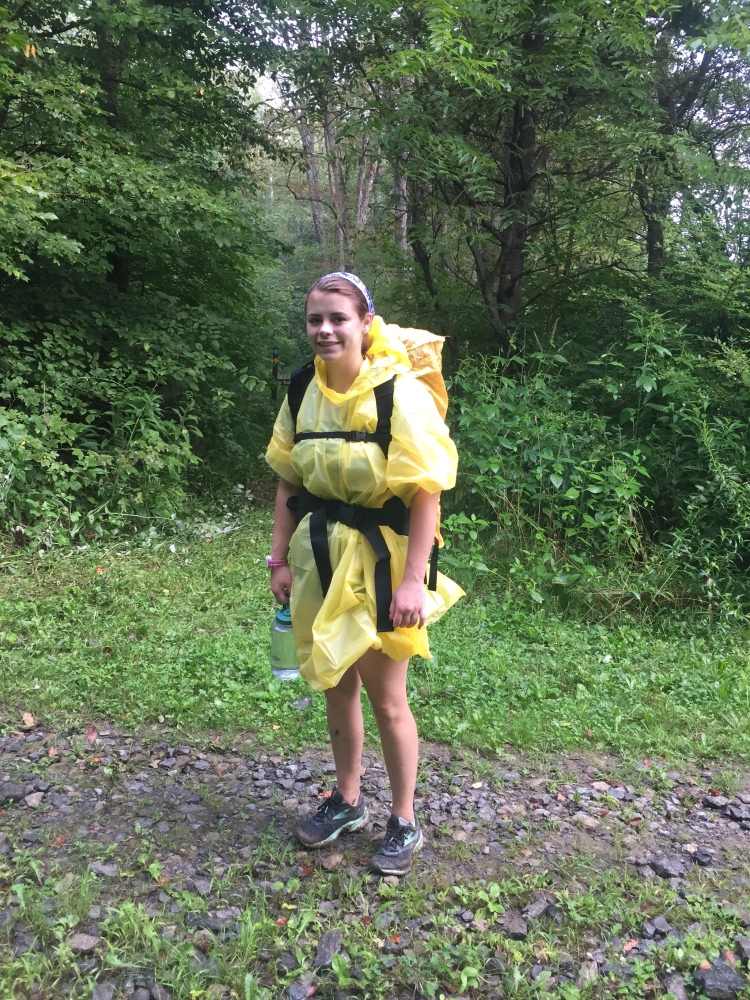 This is a picture of Emma in her rain gear.

The second day we hiked about a mile on the Appaloosa trail until we got to the Forrest trail for the last leg of the trip. 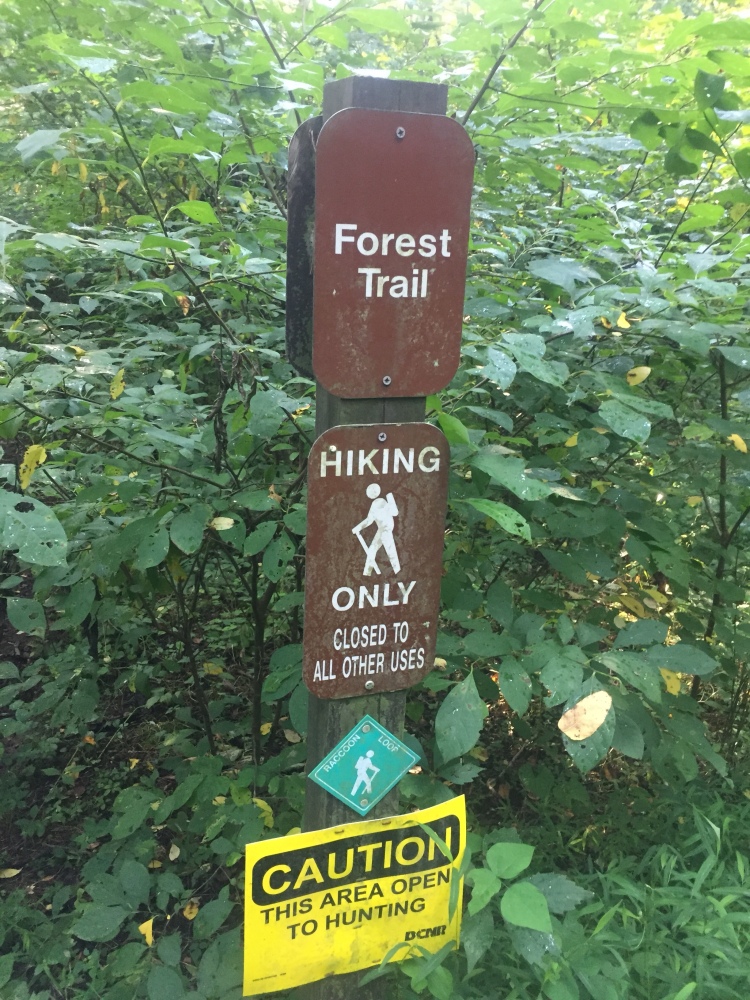 Some of the Forrest trail was really nice but other parts were extremely over grown. 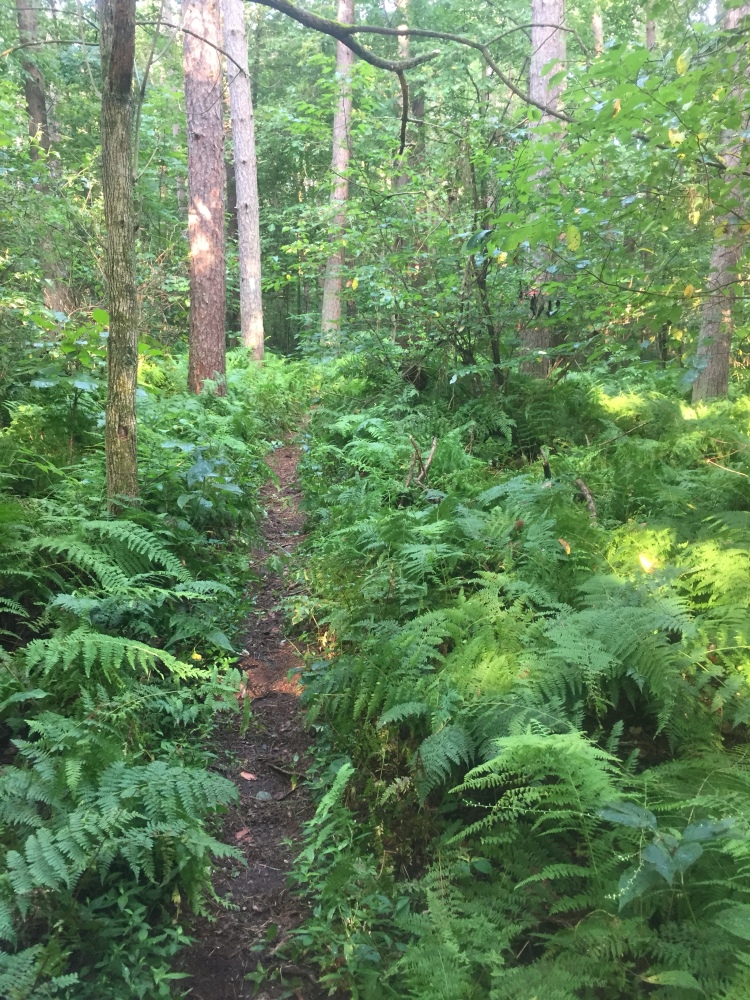 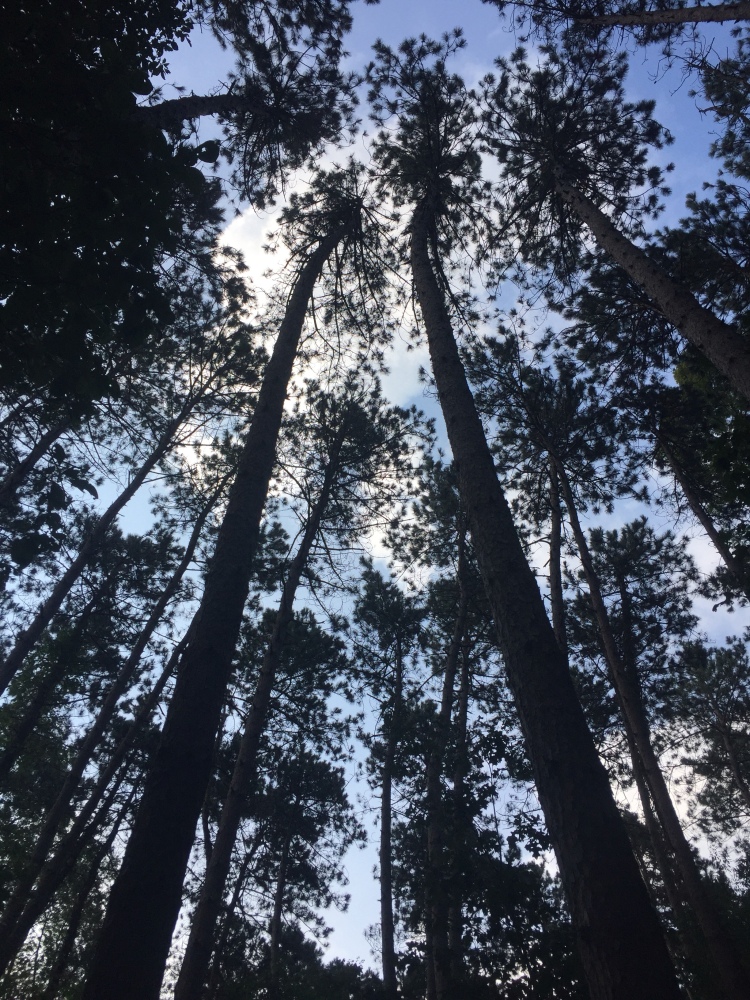 The last four miles of our trip were very very hard and somewhat miserable for me because I had no idea how far we had left, my body was just done, and the ups and downs were really really hard. I thought the section of the Forrest trail that runs along the lake was the hardest part of the hike. It is considered “more difficult” by the park but I would call is most difficult. It was so much harder than the heritage trail. Finally we reached the dam on the lake and we knew we had less than a mile to go.

This was the dam.

The last half mile of the trip was the worst part ever. We saw a sign that said Forrest trail detour indicating a route that was walking the road back to our car from the dam. We had hiked the entire trail so far so we didn’t want to take the road back and the sign didn’t say it was closed. It was an awful idea to finish the trail and It should’ve had a closed sign on it. The trail was so overgrown you could barely see where it was. We were walking though weeds that were taller than our heads. 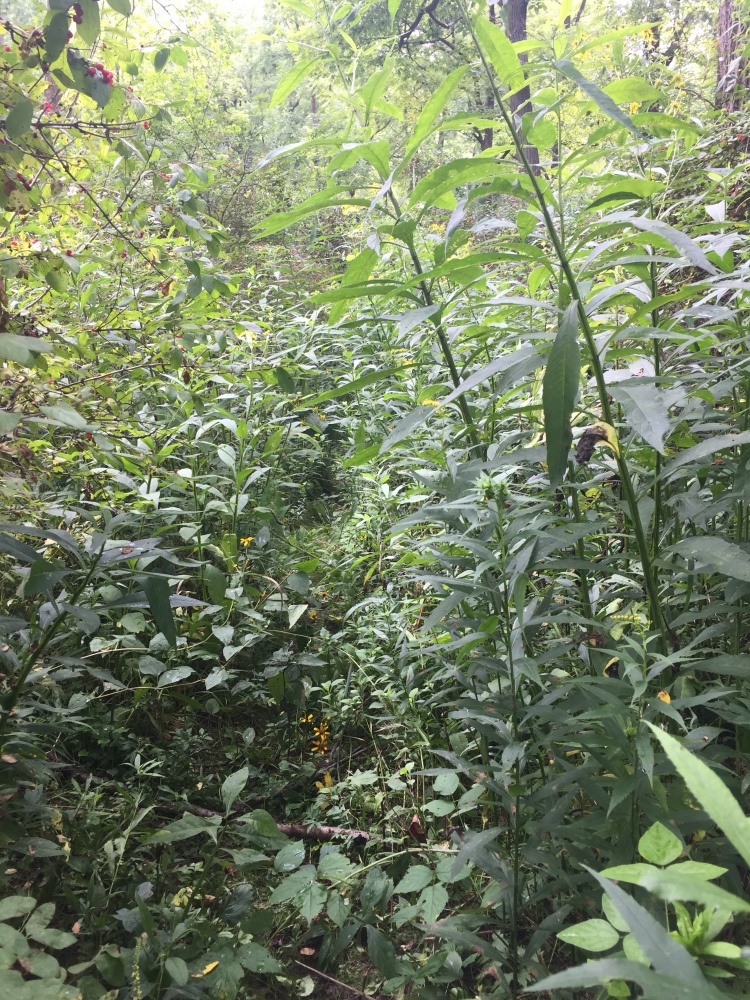 A picture of the overgrowth.

We just kept going because we were SO CLOSE to our car. Finally we came to a spot where there was supposed to be a bridge but there wasn’t one. I even walked down the small creek to find one but it did not exist. The Forrest was so thick we couldn’t continue to our car on the other side of the creek so we had to turn around and take the road. The overgrowth was so bad we couldn’t even tell where we had come from but after a few minutes we found it. As we were walking to the road Emma started to break out in very painful red hives and she was screaming and crying. I knew there was nothing else we could do other than make it back to the car to get her wiped off with baby wipes. I started pouring all of my water all over her and she started feeling better. At the car I poured even more water on her and had her wipe down with some baby wipes I had and the hives slowly went away. I assume she touched something poison or itchy in the tall weeds. She said she was in so much pain. 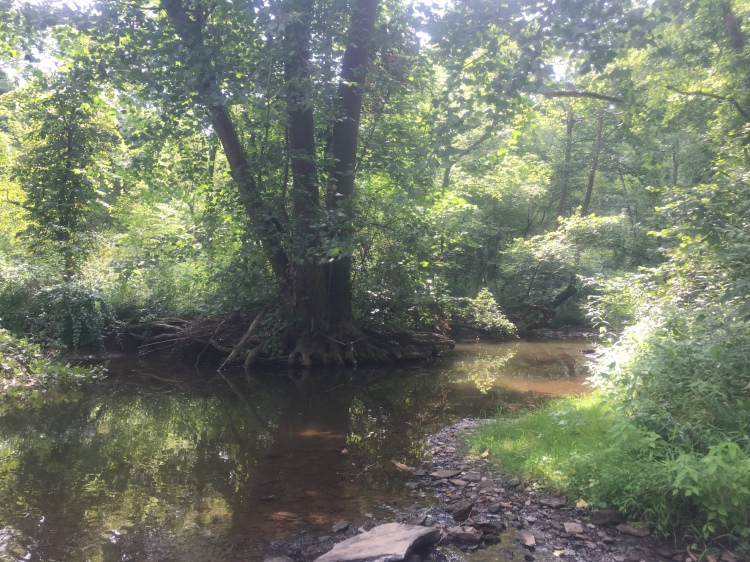 The creek where the bridge was supposed to be and I was flipping out because we had already walked through so many tall weeds to get there.

All in all we had a great trip except for the last 1/4 mile. Emma really liked backpacking and was asking when we could go again. It was a really long trip for the both of us who don’t hike much especially with a 30lb bag on our back.

At the pioneer camp site choose site number 1 or one of the shelters they are very nice.